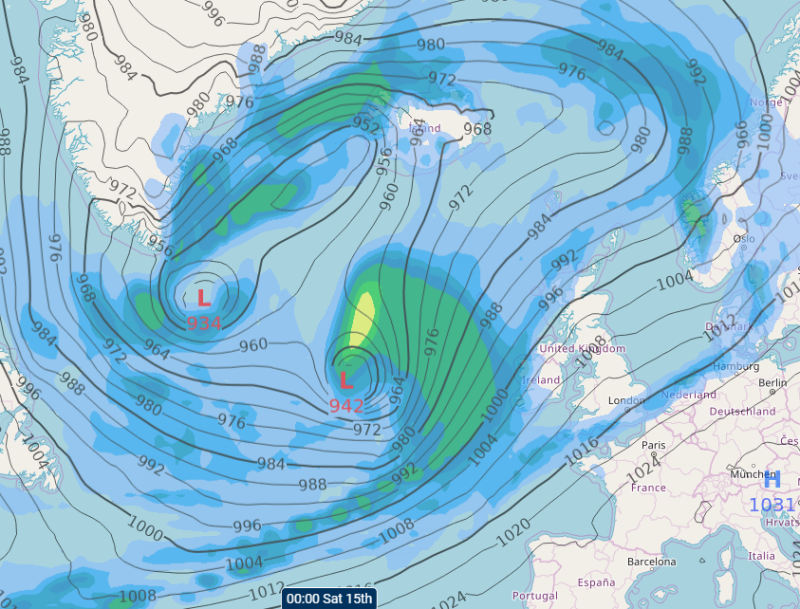 Met Éireann says Storm Dennis weather warnings will be issued on St Valentine's Day for the Atlantic storm which could bring snow and flooding this weekend.

The forecaster has issued a Weather Advisory for all of Ireland. It says Storm Dennis will bring some very wet and very windy weather over the weekend and into Monday.

It says some flooding is likely and damaging gusty winds with some disruption is also possible.

Met Éireann says Weather Warnings will be issued on Friday, February 14. The Weather Advisory is valid from 3 am on Saturday to noon on Monday.

In its weather forecast Met Éireann says Storm Dennis will bring a wet and windy day on Saturday with strong southerly winds and widespread heavy rain bringing a risk of flooding.

It says the effects of Storm Dennis will generate strong to near gale southwest to west winds on Sunday when it will also get colder with wintry showers including snow in parts.

Our Atlantic chart shows precipitation and pressure forecast in 6 hour intervals for the next 7 days.https://t.co/9Giuj4CR5m
The national forecast and the national outlook for the coming days can be found here.https://t.co/9gKN6SVok4 pic.twitter.com/uUkuGNpYvZ

TONIGHT
Dry and cold this evening and early tonight with clear spells as temperatures fall to between -2 and +1 degrees for much of the country. Some frost forming for a time with some mist and fog patches. A little less cold along Atlantic coasts. Frost clearing later tonight as strong Southerly winds develop bringing in rain to Atlantic coastal counties by dawn.

TOMORROW - FRIDAY 14TH FEBRUARY
The rain spreading quickly eastwards across the country during the morning followed by brighter weather with scattered showers. Showers becoming isolated later in the day. Winds veering Southwest and gradually moderating. Afternoon highs of 8 to 11 degrees.

NATIONAL OUTLOOK
Friday night will be dry at first with clear spells, cloud will thicken with outbreaks of rain developing, turning heavy by morning on the west coast. Temperatures will be between 3 and 5 degrees with a strong southerly wind.

Storm Dennis will bring a wet and windy day on Saturday with strong southerly winds and widespread heavy rain bringing a risk of flooding. Temperatures during the day will reach 7 to 11 degrees and will fall overnight to between plus 1 and plus 3 degrees as the rain breaks up somewhat and skies clear. There will be widespread showers through the night.

The effects of Storm Dennis will continue to generate strong to near gale southwest to west winds on Sunday. It will turn cooler with daytime temperatures of 6 to 9 degrees with showers turning wintry on higher ground in the west, further east will stay mostly dry. Scattered showers continuing overnight on Sunday with some turning to sleet or possibly snow in the north and northwest. Lows of 2 to 6 degrees.

The further outlook into midweek is for continued breezy conditions with westerly winds bringing showers to the west with the best of the sunny spells in the east.