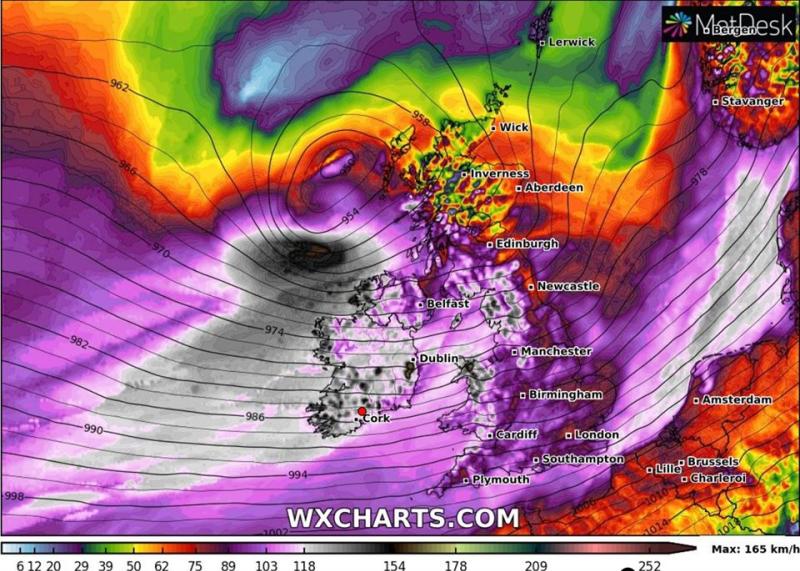 The weather forecast for Ireland for the coming days is for it to be wet and windy weather this weekend with winds potentially reaching storm force on Sunday at the coasts as Storm Ciara approaches.

Current indications suggest a very strong to near gale force and gusty southwest wind will develop on Sunday along with heavy rain, as Storm Ciara tracks to the north of the country.

The weather forecast for Ireland for Thursday is for early frost, mist or fog to clear during the morning to leave a mainly dry day with a mix of cloud and sunny spells. Afternoon temperatures will range 7 to 10 degrees in freshening southeasterly breezes.

Thursday night will be mainly dry with increasing cloud keeping temperatures above freezing. Moderate to fresh and gusty southeast winds will be strong along coasts. Overnight lowest temperatures typically 2 to 6 degrees. Some patchy rain is likely on west or south coasts before Friday morning.

Weather conditions will turn increasingly disturbed over Ireland this weekend as the jet-stream over the north Atlantic intensifies steering a series of low pressure systems towards Ireland. #StormCiara

Read more in our Forecaster’s Commentary.https://t.co/ktXtWjbfIg

The weather forecast for Ireland for Friday is for it to be cloudy and blustery. It will be mainly dry at first with just scattered outbreaks of rain and drizzle during the morning. A spell of more persistent and at times heavy rain will move into the south and west in the afternoon, becoming widespread in the evening. Afternoon temperatures of 9 to 11 degrees in fresh to strong and gusty south to southeast winds with gales along some coasts. The heavy rain will clear early Friday night and it will turn cold with temperatures falling to between zero and plus 3 degrees with a slight or sharp frost in places. Winds will be moderate to fresh and southwest in direction but with gales along Atlantic coasts.

According to Met Eireann, after a mostly dry start on Saturday morning, heavy rain and strong and gusty southerly winds will move eastwards over the country bringing a risk of very strong squally winds, with gales along all coasts and strong gale force winds along the northwest coast. Some of the rain turning wintry in parts of Ulster for a very short time. The rain possibly lingering into the evening in parts of Leinster and Munster.

Cold and largely dry for a time overnight with frost in places with lows 0 to 4 degrees. However another spell of rain and strengthening south to southwest winds will arrive into western areas before morning.

Current indications suggest a very strong to near gale force and gusty southwest wind will develop on Sunday along with heavy rain, as Storm Ciara tracks to the north of the country. The rain will clear to showers and squally westerly winds later in the day and some of the showers possibly of hail and thunder. Highest temperatures 10 to 13 degrees. Cold overnight with lows 0 to 3 degrees. A few showers will occur overnight and some of the showers turning wintry especially in the west and northwest of the country.