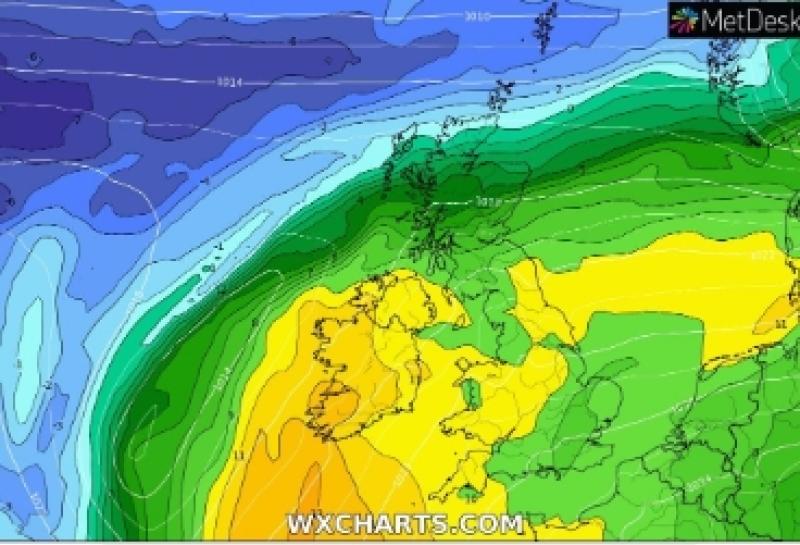 The weather forecast for Ireland for the coming week is for it to be largely dry for the week with temperatures reaching as high as 10 degrees during the days but with temperatures dropping below freezing overnight at times in places.

The weather forecast for Ireland for Monday is for it to be mostly cloudy with patchy rain across Connacht and Ulster. There will be a good deal of dry weather elsewhere apart from a little patchy drizzle and mist on southern coasts. After a mild start it will turn colder later in the day over the northern half of the country. Highest temperatures in the morning of 9 to 11 degrees but temperatures falling back to 6 or 7 degrees in the north by late afternoon. Winds will be mostly light and variable in direction.

According to Met Eireann, Monday night is likely to be a cold and clear night in the northern half of the country with lowest temperatures of -2 to +3 degrees. It will be warmer in the south overnight with temperatures staying above 5 degrees. Apart from a few showers on south coasts it will be dry.

The weather forecast for Ireland for New Years Eve from Met Eireann is for it to be dry across the bulk of the country with sunny spells. Highest temperatures of 6 to 10 degrees in mostly light winds. Largely dry on Tuesday night as well and possibly some frost.

Here is our 7 day Atlantic Chart, showing the pressure and precipitation forecast in 6 hours intervals.https://t.co/9Giuj4CR5mhttps://t.co/9gKN6SVok4 pic.twitter.com/8Lidpc1NzD

Wednesday, New Years Day will be mostly dry also with just the odd patch of light rain or drizzle. Highest temperatures of 7 to 10 degrees in moderate southerly winds. It will become windy during the evening with gales possibly on western coasts, The night will be frost-free with most areas remaining dry. Minimum temperatures 4 to 7 degrees.

Rain is likely in all areas on Thursday and for a time on Friday and it will be windy as well, but indications are that the weather will settle again after that with high pressure building.