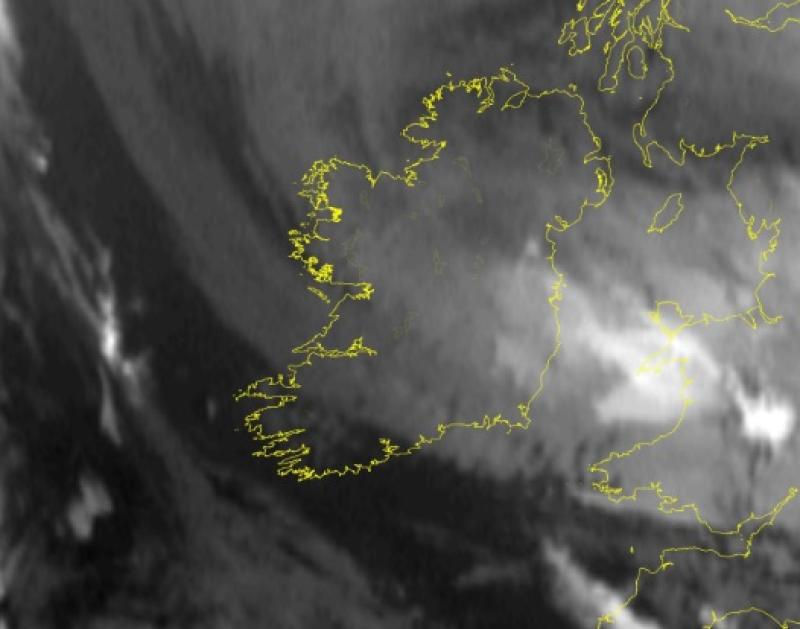 Met Éireann says there will be southwest winds of mean speeds of 50 to 55 km/h with occasional gusts of 90 to 100 km/h for a time.

The warning is valid from 8am until 1pm on Friday.

The Midlands avoided the worst of Storm Lorenzo on Thursday night, although thousands were left without power in the West with Mayo worst affected.

Met Éireann had expected the full impact of the storm to be felt on Thursday and in the early hours of Friday morning but the forecaster said on Thursday that the storm's southeasterly progress over Ireland had slowed. MORE FORECAST BELOW TWEETS

Weather warning revised to include Offaly and Kildare.

The rainfall associated with #stormlorenzo, beginning Wednesday night and continuing into Friday. pic.twitter.com/4mdCY6G6rU

Our 7 day Atlantic Chart shows the precipitation and pressure forecast in 6 hour intervalshttps://t.co/9Giuj4CR5m
A nationwide forecast and outlook covering the next week can be found here. https://t.co/9gKN6SVok4 pic.twitter.com/PqJNQKmcEW

Met Éireann website forecast issued at 9.32 am on Friday, October 4

TODAY - FRIDAY 4TH OCTOBER
Very windy with spells of heavy rain this morning - especially across the northern half of the country with damaging gusts and spot flooding. The stormy conditions will abate this afternoon with most areas becoming dry. Highest temperatures 15 to 18 degrees.

TONIGHT
There'll be patchy outbreaks of drizzle and rain moving eastwards overnight tonight and it will get misty with fog patches. Light variable winds will give way to a freshening southeasterly and temperatures will fall to 9 or 10 degrees.

TOMORROW - SATURDAY 5TH OCTOBER
Tomorrow, Saturday, will start out mainly dry and cloudy with outbreaks of rain arriving early in to the west, spreading eastwards and turning heavy with the risk of spot flooding. It'll start to clear the west coast by the time it arrives in the east. Highest temperatures 15 to 19 degrees. The fresh to strong southeast wind will veer westerly with the clearing rain.

NATIONAL OUTLOOK
The outlook for tomorrow night is for a mainly dry night with isolated showers a little more frequent around western to coastal areas. Winds will become mainly light to moderate westerly in direction with misty conditions developing again as temperatures will fall to 9 or 10 degrees.

There'll be yet another spell of rain arriving Sunday night from the west but Sunday itself will be a dry day with mist clearing early and sunshine developing in light winds. Temperatures will reach 15 to 17 degrees and light to moderate westerly winds will once again freshen overnight as the rain moves west to east. The rain will be heavy and bring more spot flooding.

Monday rain in the morning in the east will slowly clear and then it will be a mainly dry day with showers, mainly affecting the Connacht and Ulster. Temperatures will be between 15 and 20 degrees and winds will be fresh southwesterly.

Tuesday and Wednesday will be similar days with fresh, occasionally strong, southwest winds with showers mostly confined to western coastal areas. Temperatures around normal for the time of year.