Weather forecast for the coming days as Storm Gareth approaches 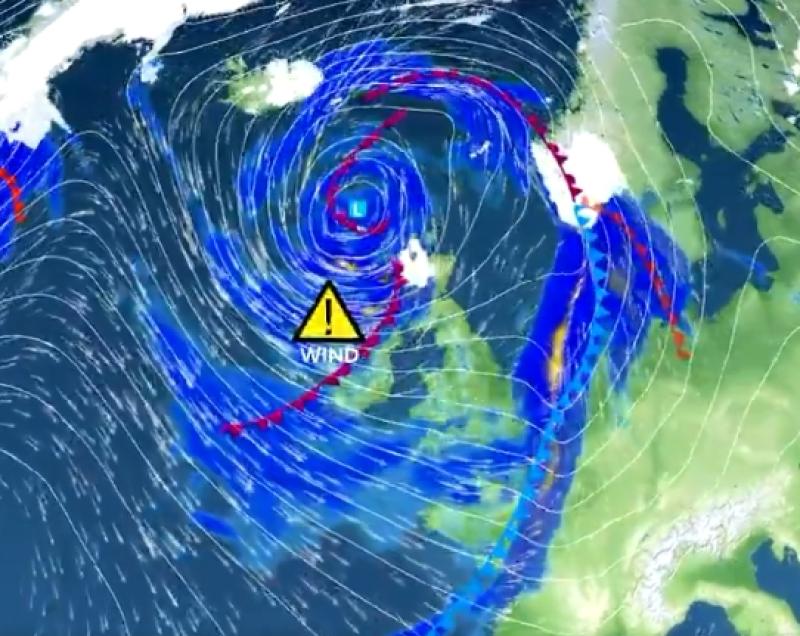 Weather forecast for the coming days as Storm Gareth approaches

There is stormy weather ahead as three separate weather warnings are in place from Met Eireann as Storm Gareth approaches the country.

A Status Yellow wind warning for Ireland. Met Eireann states that westerly winds will reach mean speeds of 50 to 65km/h and gusts of 90 to 110km. There is a risk of coastal flooding due to high seas along Atlantic coasts. That warning is in place from noon on Tuesday until noon on Wednesday.

The forecast from Met Eireann for tonight is for heavy rain for a time with a risk of spot flooding. The rain will clear eastwards after midnight and blustery showers will follow. Strong and gusty southerly winds, possibly squally for a time, will veer southwest with the passage of the rain and moderate. Mild for a time tonight but temperatures will fall to between 2 and 4 degrees around dawn.

The weather forecast for Tuesday is that remaining rain in the southeast soon clearing tomorrow morning with sunny spells and scattered showers following. Some of the showers will be heavy with a risk of hail and thunder, and they will merge to longer spells of rain in north and northwest during the afternoon. Afternoon highs of 5 to 8 degrees. Becoming increasingly windy through Tuesday as Storm Gareth tracks towards Scotland and westerly will be strong to gale force and gusty by the late afternoon, with strong gale force winds developing in the coastal fringes of Connacht and west Ulster.

Met Eireann states that westerly winds will further increase on Tuesday evening and night with potentially damaging gusts in parts of the west and northwest. The winds will veer northwesterly overnight, maintaining their strength for a time, before abating somewhat. Showers or longer spells of rain will continue with an ongoing risk of hail and thunder, especially in Ulster and north Leinster, although it will be generally drier in the south and southwest. Lows of 3 to 6 degrees.

The weather forecast is for Wednesday is for a very windy and blustery start to the day in fresh to strong and gusty northwesterly winds with gales in coastal regions only slowly easing. Showers will gradually ease through the morning, becoming confined to northeast Ulster in the afternoon. A spell of rain will push in from the Atlantic to affect western and northwestern counties later in the day. Afternoon highs will be around 7 to 10 degrees, but up to 11 degrees near the southeast coast. Rain will spread southeastwards over the country on Wednesday night with some heavy bursts, especially in Atlantic coastal counties. The northwest winds will eventually moderate early on Wednesday night, before backing westerly and freshening again overnight. Minimum temperatures of 5 to 7 degrees Celsius.

Met Eireann says there is some uncertainty in the details for Thursday, but current indications suggest a wet day for many, with widespread outbreaks of rain. A clearance may develop over more northern counties during the afternoon, but the rain looks likely to continue further south. Afternoon highs will range 9 to 13 degrees, north to south, in gusty westerly winds. Further spells of rain look likely to affect most parts of the country on Thursday night with moderate to fresh and gusty southwesterly winds. Minimum temperatures of 4 to 8 degrees Celsius.

The weather forecast for Friday is for rain to clear southwards to leave a dry afternoon with just isolated showers on Friday. Westerly winds will moderate, falling light and variable on Friday night. Maxima of 7 to 11 degrees, coldest in the west and north, dropping 1 to 3 degrees on Friday night.

Present indications suggest cold and showery conditions next weekend, with a risk of wintry precipitation. Less windy, with widespread frosts at night.