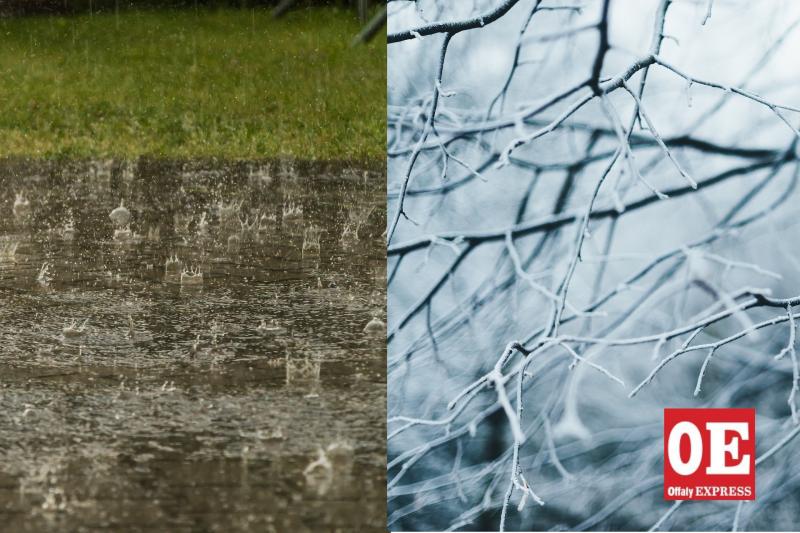 The weather forecast for the week from Met Eireann is for it to be cold, very unsettled and changeable with showers or longer spells of heavy rain, some wintry falls and some frosts

The weather forecast for Monday is for it to remain cold with snow lying in places at first today. Showers mainly of rain and hail today but showers merging to longer spells of rain at times, some heavy with the risk of thunder. Any sleet or snow showers mainly restricted to high ground. Highest temperatures of 4 to 8 degrees Celsius, in moderate to fresh west to southwest winds.

According to Met Eireann, it will be breezy tonight with further showers mainly in Connacht, Ulster and north Leinster, where they may merge to give some longer spells of rain at times and possibly wintry on higher ground. Showers will be well scattered in more southern counties. Becoming windy in the west and northwest with strong and gusty southwest winds with Gales along exposed coasts. Overnight lows of 1 to 4 degrees Celsius with some frost in places.

The weather forecast for Tuesday is for it to remain cool with showery rain in Connacht, Ulster and parts of North Leinster, but drier and brighter elsewhere in the morning. Thickening cloud will bring rain northwards through Munster and south Leinster later in the afternoon. Highest temperatures of 7 to 9 degrees Celsius.  A spell of windy and very wet weather will become widespread early Tuesday night. Heavy falls of rain may well lead to spot flooding and some wintry falls on northern hills. Overnight lows of 1 to 6 degrees Celsius, coldest over Ulster.

The weather forecast for Wednesday says it will be cold again with further wet and windy weather for a time on Wednesday with strong and gusty northwest winds and afternoon temperatures of 5 to 7 degrees through Ulster, but 7 to 10 elsewhere, highest on the south coast. Clear spells and showers following later in the day and overnight with some frost, overnight lows of 1 to 4 degrees Celsius.

It will be cool, bright and breezy on Thursday according to Met Eireann with sunny spells and scattered passing heavy showers. Blustery northwest winds will fall off moderate to fresh during the afternoon in temperatures of 7 to 10 degrees Celsius, possibly a little colder in some northern parts. Frosty overnight in lows of -2 to +2 degrees Celsius.

After a mostly dry start on Friday, rain with strengthening southerly winds will spread eastwards during the afternoon, with some heavy rain in places.

The current weather forecast for next weekend from Met Eireann says it will stay unsettled and chilly with rain or showers at times.