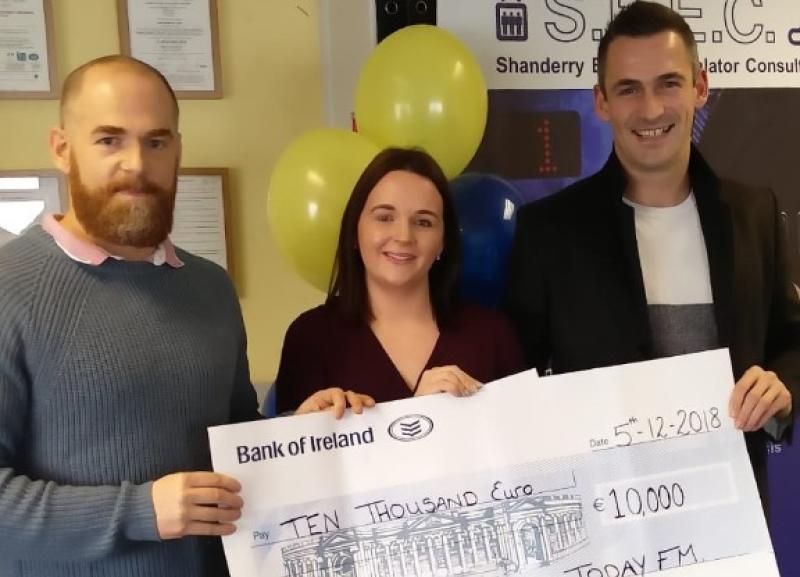 A pair of co-workers from Portarlington have won €10,000 in a competition over the national airwaves this week. Shauna Keller was announced as the winner of the ‘Ah Sure Look It’ competition on Today FM after she guessed the correct answer.

‘Ah Sure Look It’ is a daily competition that runs on Dermot and Dave on Today FM and encourages listeners to guess the words of different acronyms for their chance to win cash.

However, Shauna revealed on air that the windfall would be split with her colleague Mark Goodings as the answer had actually come from him. The colleagues, who work at Shanderry Elevator and Escalator Consultations, had spent a lot of hours in the last six weeks writing hundreds of guesses down since the clue was released.

In October it was announced by the Dermot and Dave that they would be upping the stakes, and would be giving away a whopping €10,000 to whoever could correctly guess the words for ‘D is S’.

The promotion went on for six weeks and the show received over 160,000 texts with hundreds of incorrect guesses from their listeners.

In a bid to try and settle the minds of the nation and allow someone to finally win the prize money, Dermot & Dave gave away a clue on their show by saying, “It’s time now to finally give into your demands, we’re going to give you the clue that you’ve been looking for. We want to release the €10,000! We want to let it go. OK so here is the clue, remember D is S are the missing words, guess the words you win the cash. The clue is.... ‘You’ve gotta be sound’. That is your clue.”

Finally, the correct guess, ‘Doe Is Sung’ came in and Shauna was revealed as the winner. Speaking to Dermot & Dave about how they will be splitting the prize money Shauna said: “We still have to have a big talk, we have to sort out this bliss!”

To watch the moment Shauna gave the correct guess live on Dermot & Dave, watch HERE. Dermot & Dave play ‘Ah Sure Look It’ weekdays from 9am.