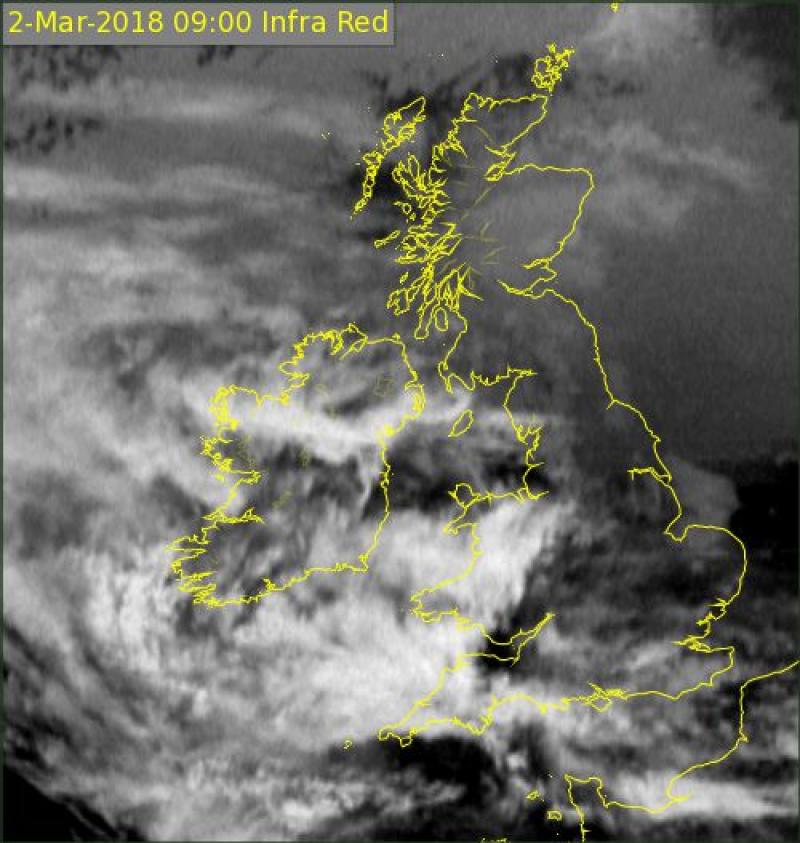 Satellite Map of Ireland at 9am from www.met.ie

According to Met Eireann's latest weather forecast, it will remain very cold and overcast with scattered outbreaks of sleet and snow for the rest of today

The snow will be heavy and persistent across the south and east. Further accumulations will occur. Ulster and Connacht will have good dry spells and the snow will turn to sleet in some coastal areas of the south and east. Easterly winds will be strong and gusty. Highest temperatures zero to +3 degrees. (FORECAST CONTINUES BELOW)

Tonight will continue very cold. There will be further outbreaks of snow especially over the midlands, north and eastern counties, but it will be mostly of rain further south. Dry spells too. Minimum temperatures zero to -3 degrees coldest inland. A sharp frost and icy patches widely. Fresh east winds.

Tomorrow Saturday will be another mostly cloudy day. Outbreaks of sleet widely, but still with the chance of snowfalls over high ground and in the north. Precipitation increasingly as rain by afternoon. Fresh east winds. Highest temperatures ranging from 2 in the north to 6 or 7 degrees in the far south.

Highest temperatures during Sunday will only be around 2 to 4 degrees. There will be a good deal of dry weather across the south of the country but wintry showers or some showery rain will affect more northern counties. Widespread frost overnight.