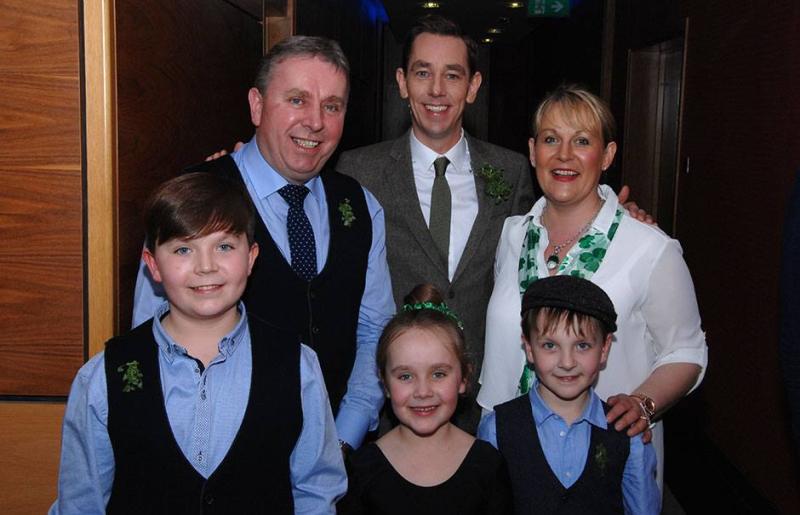 The Wrafter Family have just been announced as the very special guests of The Three Tenors for their show in the Greville Arms Hotel in Mullingar on Saturday evening. The Kilbeggan family first shot to national prominence about a year ago when husband and wife Peter and Noreen, together with their three young children, Conor, Thomas, and Aimee, joined Ryan Tubridy on The Late Late Show for what turned out to be a memorable Saint Patrick's Night performance of the tune, 'The Blarney Stone.' Since then, the Wrafters have also appeared with The High Kings on a number of occasions, and have some more exciting dates in their diary for throughout 2018 and into next year. But first up is next Saturday night, and it's an evening Peter is looking forward to.

"We're delighted that we've been given such an honour as this, being able to appear with Dominic, Shane, and Derek. You're talking about three unbelievable voices with these men, just superb. They've been a credit to this country everywhere that they've played, and you only have to look at some of the places that they have performed to realise their standing; the National Concert Hall, Cork Opera House, Dublin Castle... no-one ends up playing any of those venues by accident. You have to be something special, and The Three Tenors are most certainly that. It will be pleasure and a privilege for us to be a part of their night and their show” he stated.

Peter is far from alone when it comes to praise for The Three Tenors, with President Michael D. Higgins having observed that, "....this trio knows how to entertain....', and describing their performances as 'Powerful.' And in the words of the New York Times, 'I would recommend this wonderful concert to anyone - the most delicious box of chocolates your ears could ever have. Knockout vocal performance.”

The Three Tenors were selected by the Irish government to headline their 1916 Centenary State Reception which took place in Dublin Castle back in March of 2016, for specially invited guests from around the world. They were also chosen to perform a unique role for the opening of the 50th International Eucharistic Congress, both in the RDS and in Croke Park in 2012, before an audience in the region of 100,000. And fans who attend the Greville Arms this weekend can expect to be treated to an exciting flavoured set, which will include versions of such well-known standards as 'My Way', 'The Wild Rover', 'Nessun Dorma', and 'Over The Rainbow.'

The Wrafter Family will be opening the show for The Three Tenors in the Greville Arms, as well as getting the second half of the evening's entertainment underway, too. Who knows, there just might be another very special performance to bring the night to a close. It'll be worth being there to find out.

Tickets for The Three Tenors in concert at the Greville Arms Hotel, Mullingar, on Saturday 24th February, with very special guests The Wrafter Family, are available from hotel reception. For more information, call 044-9348563