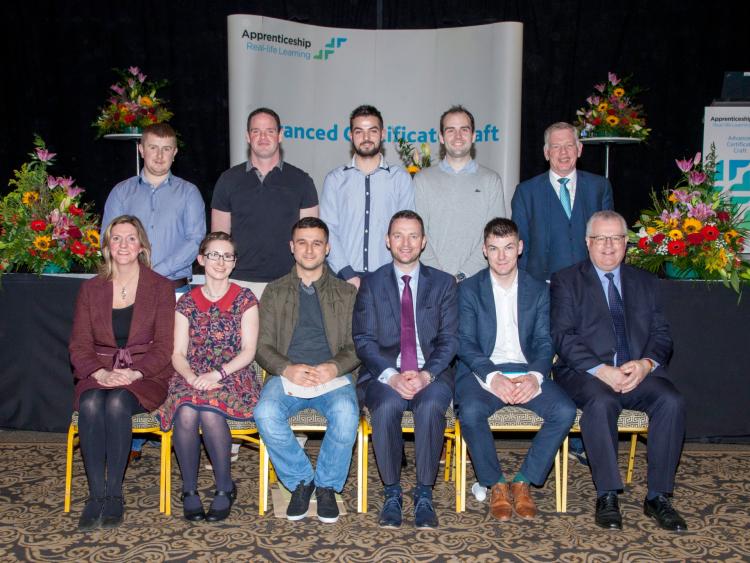 Graduating apprentices from Laois and Offaly who recently completed their apprenticeship were presented with their Advanced Certificate Craft at a ceremony in City West this week.

Apprentices graduated in a range of crafts including Electrical, Motor Mechanics, Agricultural Mechanics and Carpentry and Joinery.

The Advanced Certificate Craft is at Level 6 of the National Framework of Qualifications and is an internationally recognised qualification.

The event was co-hosted by SOLAS, Dublin and Dun Laoghaire ETB, City of Dublin ETB, Laois and Offaly ETB, Longford and Westmeath ETB and Kildare and Wicklow ETB.

Speaking at the presentation, Paul O’Toole, CEO, SOLAS, spoke of the Apprenticeship programme and drew particular attention to the calibre of the Irish Apprenticeship system which is recognised nationally and internationally.

“You have completed a comprehensive Apprenticeship that is recognised at home and abroad as one of the best in the world. An example of the standards achieved by apprentices during their apprenticeship is the success by the Irish Team at successive World Skills Competitions."

Representing the Education and Training Boards, Paddy Lavelle, CEO, Dublin and Dun Laoghaire Education and Training Board congratulated apprentices and spoke of the skills they have gained through their apprenticeship saying, “the Irish Apprenticeship system of on and off the job training periods provides people with excellent core skills, specific skills in the chosen area, for example, Electrical, Plumbing, Mechanics and very important life skills such as instilling a work ethic and
discipline."

"As Ireland’s economy continues to recover and businesses expand, there is a growing demand for people with vocational skills. Businesses need people with strong practical skills and apprenticeship is key to delivering this. The Irish Apprenticeship system has proven highly successful in developing highly skilled workers like those receiving the Advanced Certificate Craft today."

"Since 2016 the range of apprenticeship options in Ireland has extended in areas such as Insurance Practice, Electrical Engineering, Polymer Processing, Manufacturing Engineering, International Financial Services, Commis Chef and Accounting with many more on the way."

"Alongside this, we are seeing an increase in the number of new apprentices being registered across the all of the current
trades. This is a testament to the high regard which the apprenticeship system in Ireland is held. It has long been respected as a comprehensive and successful career and education route for people of all ages."

Concluding the ceremony, Paul O’Toole congratulated the apprentices who received their Advanced Certificates Craft on their achievement of being recognised as highly skilled craftspeople and wished them every success in their careers.