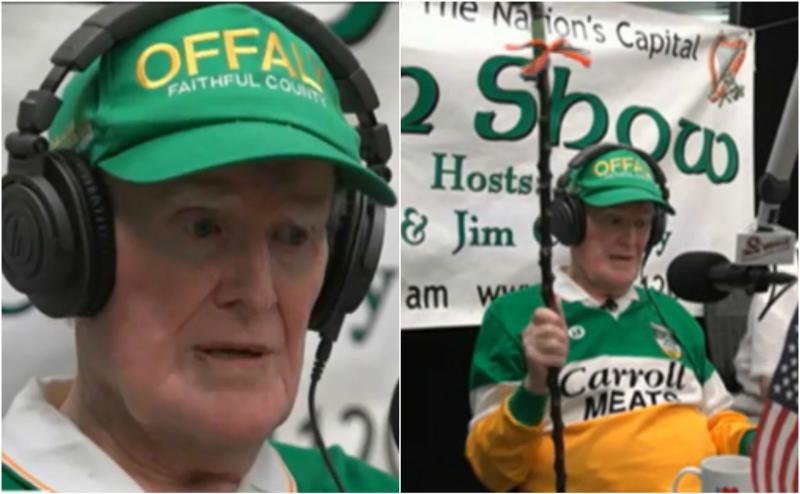 Offaly native Pat Troy has featured on RTE News today as he gave his opinions on the US President, Donald Trump to the channel's Washington Correspondent, Catriona Perry.

Troy, who is originally from Kilcormac, Co. Offaly, is a proud Republican, and expressed his support for President Trump as one of the most prominent Irish-Americans in Washington.

He's been in Washington since 1962 and is credited with starting the St. Patrick's Day parade in the city. He has always been a proponent of all things Irish in America, and ran a local radio show called 'The Irish Show' for more than 45 years until June 25 this year when he signed off for the final time.

He opened his show every Sunday with a rendition of A Nation Once Again by the Ballinamere Céili Band from Offaly. He even presented his final ever show in a vintage Offaly GAA jersey and hate, emblazoned with the words, 'Faithful County.'

Pat owns the Ireland's Own Bar in Alexandria, Washington, an establishment once visited by US President Ronald Reagan in 1988. The President was greeted at the door by Pat, wearing, you guessed it, the Offaly colours.

Reagan even rang in to Pat's show one Sunday morning, in which he said: "This is Ronald Reagan. Top of the morning to you."

"We do enjoy your programme and more importantly we appreciate the things that you've done for your adopted country, Pat, as well as the contributions Irish-Americans have made to our country," Reagan continued.

Speaking today on RTE News, Pat spoke about the latest Republican President, one Donald J. Trump. Of Trump, the Offaly native said: "He told it the way it was. He was arrogant. No one is perfect."He did admit that some of Trump's social media habits may not always be to his liking. "All of his tweeting sometimes irritates me too but I say, that's Donald Trump."

He claimed accusations of Donald Trump presidential campaign being caught up with Russian interference were "stupid and sick." "They're going to dig up all kinds of stuff to be against the president and be nasty," he said.

The man has been recognised by baseball teams, the church, rubbed shoulders with Presidents and even Pope Francis, but through it all, even supporting Trump, he has worn his Offaly heritage as the biggest badge of honour of all.

To watch Pat's appearance on the RTE News at One this afternoon, simply click here.