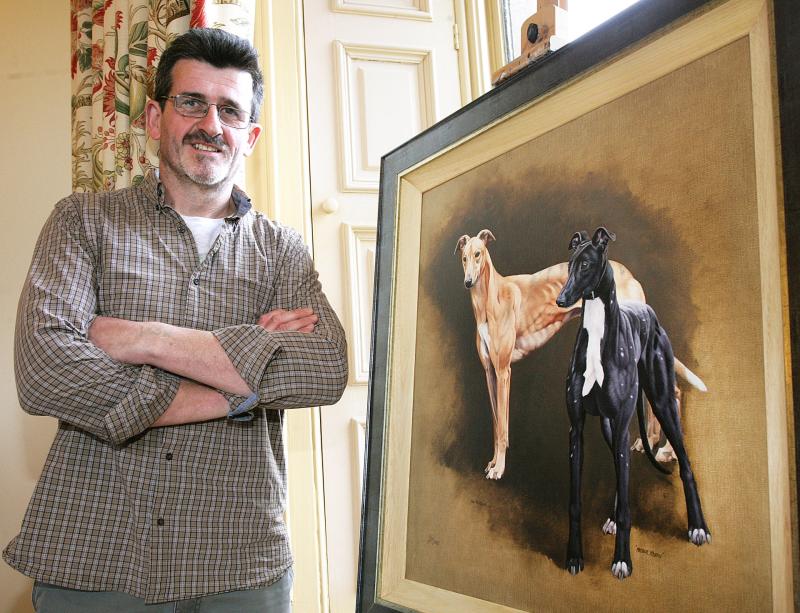 The Game Fairs at Birr Castle in Offaly and Shanes Castle in Antrim are twinned under the Great Game Fairs of Ireland brand and are increasingly drawing significant regular tourism exchanges.

In 2017, there was a very visual link established between the two events with the twin promotion of the Master McGrath lurcher racing challenge in Northern Ireland and the new Mick The Miller challenge to be staged at Birr Castle on the August 27.

This was emphasised by the commissioning of a painting of the two great dogs by internationally acclaimed Antrim artist John R. Moore. The Great Game Fairs of Ireland Master McGrath Challenge race is the top racing event for Elite Lurchers, with qualifiers held in Ireland and the UK and there was a hotly contested final at Shanes Castle Game Fair in June.

Director Albert Titterington stated: “It had to have been the closest racing I have ever seen at Shanes Castle resulting in a blanket finish, and Scooby from County Carlow took first place by the smallest margin over his closest rivals, all from the Carlow/Offaly area."

There was a huge crowd watching the racing, many of whom had travelled the length and breadth of Ireland with a great number visiting from Offaly, the location for the next event, the Irish Game & Country Fair at Birr Castle on August 26 and 27.

Now, the lurcher racing world’s focus falls firmly on the next blue riband event, the final of The Great Game Fairs of Ireland Mick the Miller Challenge race.

Albert Titterington explains: “Mick the Miller is another Sporting Legend brought to life by the Great Game Fairs of Ireland this time for non elite Traditional lurchers. This great Offaly greyhound became a sporting legend throughout the world. While we honoured one canine superstar at Shanes Castle, with Mick the Miller’s birthplace literally down the road from Birr Castle, it was an obvious choice to honour this canine champion at our Birr Castle Game Fair."

Albert Titterington said: “The race has been warmly welcomed by the official Mick the Miller Commemoration Committee from the birthplace of the great dog in Killeigh, Co Offaly.”

During an incredible career in Britain, Mick the Miller triumphed in 36 of his 48 races, including the Welsh Derby, the St Leger, the Cesarewitch and the Derby. He set two new track records and six world records. He was the first greyhound to win 19 races in a row and became a household name.

“Without doubt this race will attract racing enthusiasts from throughout Ireland and I know that huge numbers will be making the trip from Antrim to enjoy the event. In fact, I am delighted to report that many Northern Ireland enthusiasts are planning to team up with their race-going friends whom they met at Shanes Castle to watch the final of what promises to be the most exciting racing event ever seen at Birr Castle," Titterington said.

“We have indeed created for the first time what the racing world is calling a ‘canine corridor’ and with 2018 being the 150th anniversary of Master McGrath’s triumph in the Waterloo Cup, we feel that this will not only be a corridor for canine competition, but also a real all Ireland corridor for tourism in Antrim."

The Great Game Fairs of Ireland acknowledge the support of TourismNI, Antrim and Newtownabbey Borough Council and Failte Ireland.