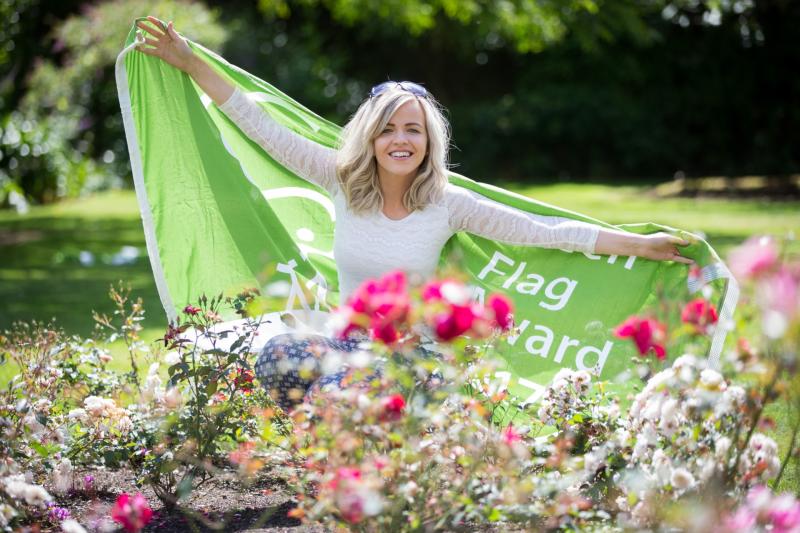 Malahide Castle Visitors Centre provided this year’s venue to celebrate the 36 Irish Parks from across the Republic of Ireland receiving their Green Flags. These are awarded for exceeding tough environmental standards for green space management, and for delivering excellent visitor facilities – the Green Flag Award is the mark of a quality park or green space and is recognised throughout the world.

The 2017 awards are available to public parks, country parks, cemeteries and green spaces across the whole country, and this season has seen an additional 14 applicant parks qualify for a green flag.

Last year saw the initial introduction of the Green Flag Award for Parks Scheme across the whole of Ireland, and this resulted in some of Ireland's most significant landmark parks and estates being recognised for the quality of their recreational and historic green space.

Building upon this success additional local authorities have entered the scheme for the first time in 2017. First time winners this year include not only parks from urban centres such as Dublin, but also parks from towns within the Ancient East Region, including Dundalk, Kildare and New Ross. New entrants also feature from locations along the Wild Atlantic Way such as Vandeleur Walled Gardens, and Garinish Island.

The Minister of State for Housing and Urban Renewal – Damien English T.D., was in attendance to open the award ceremony, and to support how the important role played by local authorities is being recognised.

Minister English commented that, “the Green Flag Awards encourage the provision of good quality public parks and green spaces that are managed in environmentally sustainable ways.The act of planning, creating, and using a public utility, be it a community garden, park or open space, brings people, communities and neighbours together.  It is an essential component of a healthy lifestyle to have access to, and to be able to enjoy, outdoor amenities particularly those which are so well tended and maintained."

The Green Flag Awards are judged every year by a peer jury of green space experts, who volunteer their time to visit applicant sites and assess them against eight strict criteria, including horticultural standards, cleanliness, sustainability, and community involvement.

Robert Moss also noted that this year’s awards see the introduction of the Pollinator Project Award for those parks that have made a specific effort to support the local pollinating insect populations, or to promote their importance. This award is jointly run with the National Biodiversity Data Centre to support the All Ireland Pollinator Plan, and is kindly sponsored by Young’s Nurseries.

While there were pollinator project awards across different park categories it was the Phoenix Park operated by the Office of Public Works in Dublin that was the overall winner. This site features not only pollinator friendly planting and gardening, but also makes a great effort to educate the public and to promote these efforts through its website and social media.

If you are interested in finding out further information about the Green Flag Award or other programmes run by An Taisce Environmental Education Unit please e-mail us atrmoss@eeu.antaisce.org or telephone: 01 4002212.