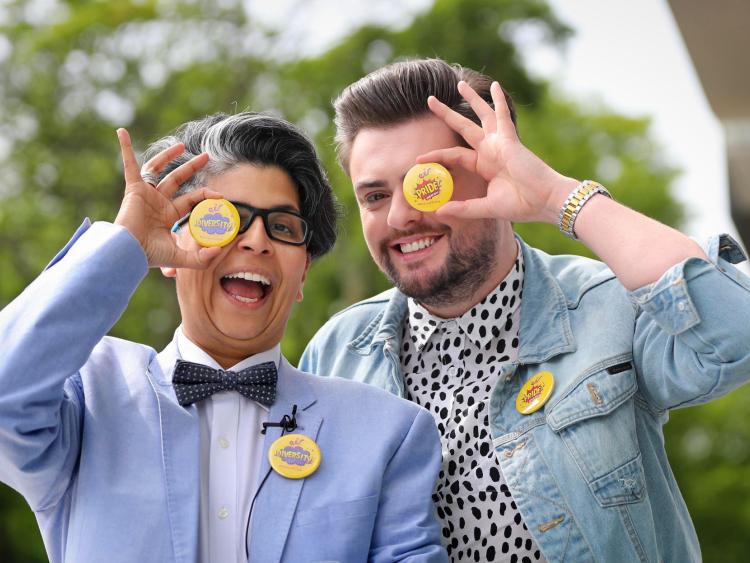 Pictured yesterday at the launch of the LGBT Helpline and eir’s ‘It’s Good To Talk’ campaign were Broadcaster Dil Wickremasinghe and Digital influencer and broadcaster, James Patrice

Growing numbers of LGBT people are choosing to come out online in Offaly and around the country, according to the LGBT Helpline, the national support service for Lesbian, Gay, Bisexual and Transgender people.

The organisation held an event with eir yesterday, which focused on the role of the internet in the lives of LGBT people. Helen McEntee TD, Minister of State for Mental Health, was the guest of honour at the event, while a panel discussion took place with contributions from psychotherapist Colman Noctor; digital influencer James Patrice; broadcaster Dil Wickremasinghe; and Ian Power, Executive Director of Spunout.ie.

Speaking at the event, Paula Fagan, National Coordinator of the LGBT Helpline, said the experience of coming out has changed significantly as a result of digital communications.

“In the past, coming out tended to be a very personal experience, where you opened up about your sexuality to a small number of trusted family members or friends,” she said. “And while people are still careful about who they tell when they are first coming out, once they feel more comfortable about their sexuality, more and more people are choosing social media platforms such as Facebook and Twitter as a way of telling other family members, friends and their wider social circles."

“The volunteers who work in our support services are increasingly hearing from people from around the country who have made the decision to come out online, but who are then very anxious as a result, wondering how this huge event in their lives will be received.  People can spend a lot of time deliberating over whether or not to come out online and then, after doing so, they can feel quite exposed," she added.

“On the up side, we’re seeing that most people receive a lot of positive affirmation after coming out online. They find it a reassuring experience, with social media often helping them to feel less isolated and allowing them to tap into extensive online support networks. But it is a big step, so we do encourage people to think about it carefully and consider what supports they have offline, in particular who they can talk to if they do not get the reaction they are hoping for.”

In addition to the phenomenon of coming out online, Ms. Fagan said the LGBT Helpline is increasingly being contacted by victims of cyber-bullying.

“Mainly, this presents where people are either threatened with or have experienced negative comments being posted online about their sexuality or gender identity,” she said. “We are also hearing from people who have been threatened with, or have had, private images of themselves shared online, sometimes by an ex-partner.”

Ms. Fagan said social media use tends to be higher amongst LGBT people than the general population, with figures from 2014/2015 showing:

One in every three contacts to the LGBT Helpline is now made through the organisation’s online instant messaging service, as opposed to the more traditional contacts through telephone helplines. Furthermore, over 80,000 people visit the LGBT.ie website every year, to access information on LGBT services and supports nationwide. The web-pages on coming out and what it means to be LGBT are amongst the most popular.

At yesterday’s event, Helen McEntee TD, Minister of State for Mental Health, highlighted the excellent work done by organisations such as the LGBT Helpline in safeguarding and promoting people’s mental health.

“Undoubtedly, the internet has brought much good,” she said. “However, it has also introduced new pressures and new ways for people to scrutinise, judge and criticise each other.

“I commend the LGBT Helpline for exploring how the internet is impacting on the LGBT community, and what actions need to be taken to protect and safeguard people’s mental health, both in online and offline spaces," she added.

"Services such as the LGBT Helpline play a crucial role in supporting people who may have experienced cyber bullying, online harassment or negative feedback on social media.  I am delighted to see the Helpline partnering with eir on the ‘It’s Good to Talk’ positive mental health campaign during this Pride month.”

‘It’s Good to Talk’, a positive mental health campaign by the LGBT Helpline and eir was launched at yesterday’s event. The campaign will see the two organisations working together throughout Pride 2017, including having a joint float at Dublin Pride on June 24.

Speaking about its partnership with the LGBT Helpline, Michelle Toner, Head of CSR, eir, said: “The LGBT Helpline provides crucial support and we are very proud to partner with it to raise awareness of the vital services it provides nationwide. Being able to talk with trained volunteers is so important to those people going through difficult times in their lives. Through our ‘It’s Good to Talk’ campaign we are encouraging everyone to put their mental health first and to remember that there is always someone to turn to."

“We launched our first LGBT network, eir Spectrum; two years ago. It is a fully inclusive team of LGBT employees and straight allies working together.  The goal for this team is to continue to support an environment and raise awareness of eir as a company where everyone can bring their whole selves to work and where all employees are respected for what they, as individuals, bring to the eir team," she concluded.