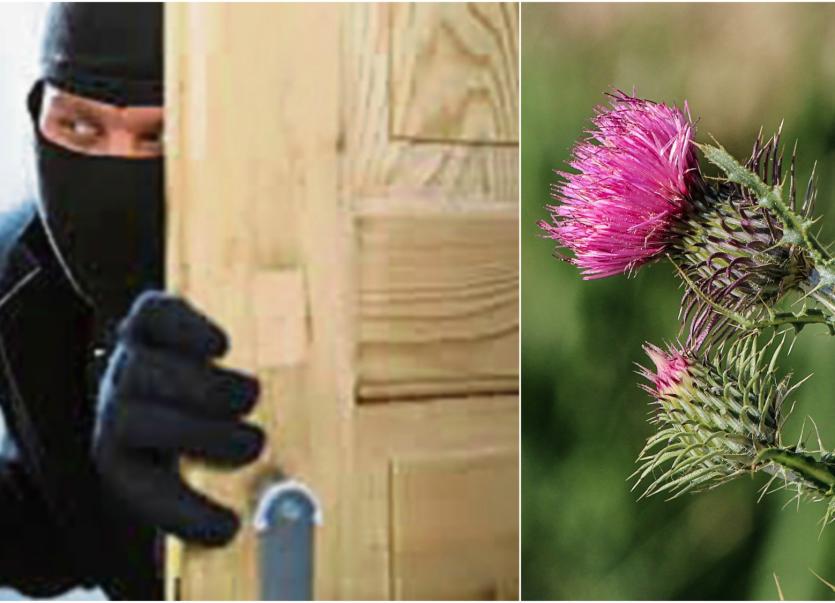 An Garda Síochana have issued an anti-burglary warning to the public and have suggested that growing "prickly plants" around your house and garden could deter thieves.

As well as securing doors and windows, to coincide with the Bloom Festival, An Garda Síochána gave the unusual anti-crime tip recommending householders grow specific plants to help ward off burglars.

Known as "defensive planting”, a barrier of prickly hedge along the boundary of a home or underneath a window provides an extra layer of home security, according to Gardaí.

Mahonia, Purple Berberis, Ulex Europeans, Golden Bamboo, Firethorn and Shrub Rose are among the 16 plants Gardaí have listed as barriers that help put off thieves from entering properties.

The advice was given at Bloom in the Park for the launch of the latest Supporting Safer Communities Campaign.

This latest Garda campaign focuses on reducing summertime home burglaries through awareness and promotion of good home security habits. It is part of Operation Thor, which has reduced home burglaries by 30% through preventative and enforcement measures since it began in 2015.

Fresh figures released by the Garda Síochána Analysis Service as part of the campaign show:

• Almost one in four home burglaries during the summer involves entry through an unsecured door or window – this falls to one in six during winter;
• Most summer home burglaries occur late at night between midnight and 4am and in the afternoon between noon and 3pm;
• Overall, there were 16% fewer residential burglaries reported in summer months of 2016 compared to winter months.
The campaign is also highlighting how gardening equipment, tools and bikes are more likely to be stolen by thieves during the summer.
• Theft of gardening equipment rose by 23% in summer last year compared to winter, with €191,522 worth of equipment taken;
• €32,100 worth of ride-on mowers was stolen last summer, compared to €18,000 worth in winter;
•  Smaller, less expensive tools such as con-saws and chainsaws are stolen more frequently during summer, while larger industrial power tools are more likely to be taken in winter;
• The value of bicycles stolen in summer 2016 was €278,339, compared to €226,342 in winter;
• Sports equipment is also a greater target in summer - €36,620 went missing last summer in contrast to €22,221 in winter.

Sergeant Kelvin Courtney of the Garda Crime Prevention National Centre of Excellence, said: "The summer months are a good time to think about defensive planting. Hedges and shrubs in the front garden should also be kept to a height of no more than three feet in order to avoid giving a burglar a screen behind which they can hide,” he added.

Sgt. Courtney also advised that people who are on holidays should refrain from posting on social media as it will alert potential burglars that their home is vacant.