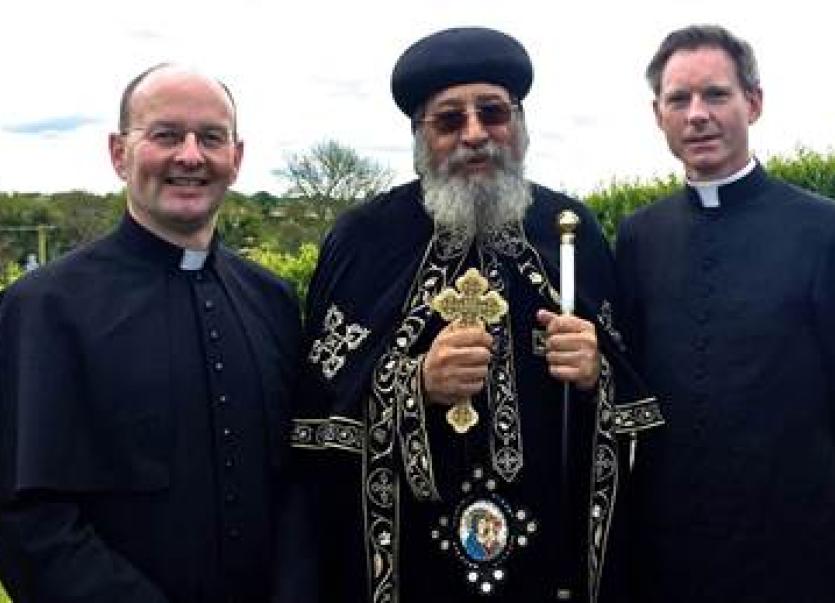 On Friday, the Coptic Orthodox Leader, His Holiness Pope Tawadros II, has visited the Diocese of Meath.

On behalf of Bishop Michael Smith, Bishop of Meath, Fathers William Coleman and Paul Crosbie were present when His Holiness blessed and dedicated a new Chapel at Saint George Abbey, a Coptic Orthodox community established a number of years ago in Billistown, near Delvin, Co Westmeath.

Prior to today’s liturgy, His Holiness received Fathers Coleman and Crosbie in audience, during which the persecution of Christians in the Middle East was discussed.

This is the first time that Pope Tawadros, Pope of Alexandria and Patriarch of the See of Saint Mark, has visited Ireland as head of the Coptic Orthodox Church whose membership remains predominantly in Egypt.

Last month, Pope Francis visited Cairo at the invitation of Pope Tawadros and the grand imam of the mosque of al-Azhar, Sheikh Ahmed Mohamed el-Tayeb, as well as Catholic Bishops and the Egyptian government. Coptic Christians currently represent 80% of Christians in the Middle East. Following a meeting between Pope Francis and Pope Tawadros in Egypt, a new common declaration was issued.

The declaration emphasised the need for intensified prayers for all Christians who are persecuted and killed for their faith, especially in Egypt and the Middle East. The declaration from Pope Francis and Pope Tawadros also called for a deepening of their shared roots in faith through common prayer, a common translation of the Lord’s Prayer and a common date for the celebration of Easter.