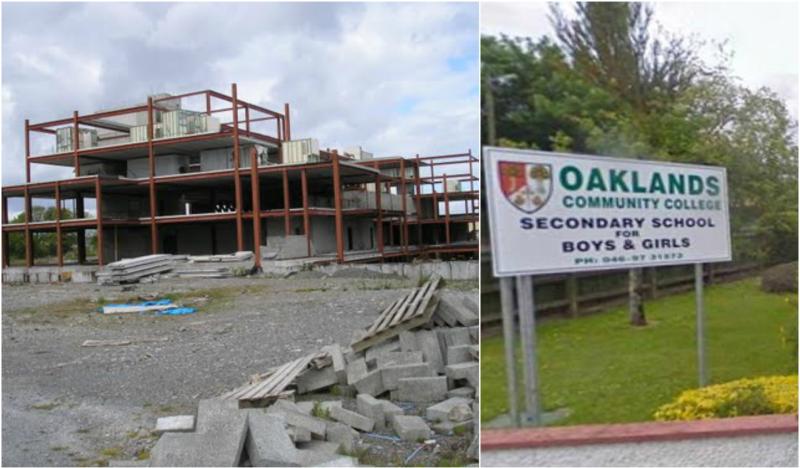 After months of negotiations, the proposed deal to move Oaklands Community College to the derelict hotel site in Edenderry is "inching closer," according to Offaly County Councillor, Noel Cribbin.

"My information tells me that all handshakes are done and only the legal papers now need to be signed off on," Cllr Cribbin told the Offaly Express. "When completed, this will be a huge development, not only for Oaklands, its pupils and teachers, but for the town as a whole because it will bring huge footfall to Dunnes Stores and the Main Street with over 700 students and 70 teachers moving to the town centre," he added.

The Edenderry based councillor also said that school traffic being broken up and dispersed through three different exit roads from Dunnes Stores will be an "added bonus."

"Personally, I am delighted that this transfer looks set to happen as it was myself who proposed the idea," Cribbin remarked. He followed this call with a visit to Principal Gerry Connolly, where he made the same proposal. "To be fair, making a proposal is one thing, but getting it over the line is another and there are many who deserve great credit for this project," Cribbin stated.

"We all remember how dangerous the hotel site was with many kids hanging out there and the danger it caused with the basement full of stagnant water."

Cribbin said that all local councillors continued to raise these safety issues and he also gave credit to Council officials, in particular Declan Conlan, who he says "played a huge part in firstly dealing with the banks and NAMA, and in eventually getting the hotel property into the council portfolio."

"This was very tedious work and took great perseverance, but after months of negotiations the council has since taken charge of the site," Cllr Cribbin explained. The next port of call was to make the site safe; emptying out the water, putting up fencing and putting security personnel on site, all at a considerable cost to the council.

A deal between the VEC and Offaly County Council followed, according to Cribbin, and once again Declan Conlon was to the fore along with Oaklands' Principal, Gerry Connolly. "Oaklands got huge support from Cllr Liam Quinn, who is also a teacher in the school, and they played a major part in convincing the VEC of the importance of this site and how badly the school needed a move with pupil numbers continually on the rise," Cribbin remarked.

The last piece of the jigsaw was with developer Hugh McGill who owned the land to the rear of the hotel site. "Whilst it's disappointing that the hotel never came to pass and a hotel is the one facility that Edenderry is crying out for, I am still delighted that we will, in the next few years, have a new state of the art school for the pupils and staff of Oaklands College," Cllr Cribbin stated.

"Edenderry is turning the corner and with the new €2 million Ambulance Station build started, 33 new council houses gone to tender at a combined value of €8 million, the GAA development up and running, and hopefully the hard-working swimming pool committee will get the go ahead for their new €4.5 million pool."

"The council staff have proven with this hotel/Oaklands development that they can move heaven and earth when needed and I am very hopeful that, working together, we can bring huge improvements to the town with new facilities like the new library, theatre and arts centre building," Cllr Cribbin concluded.