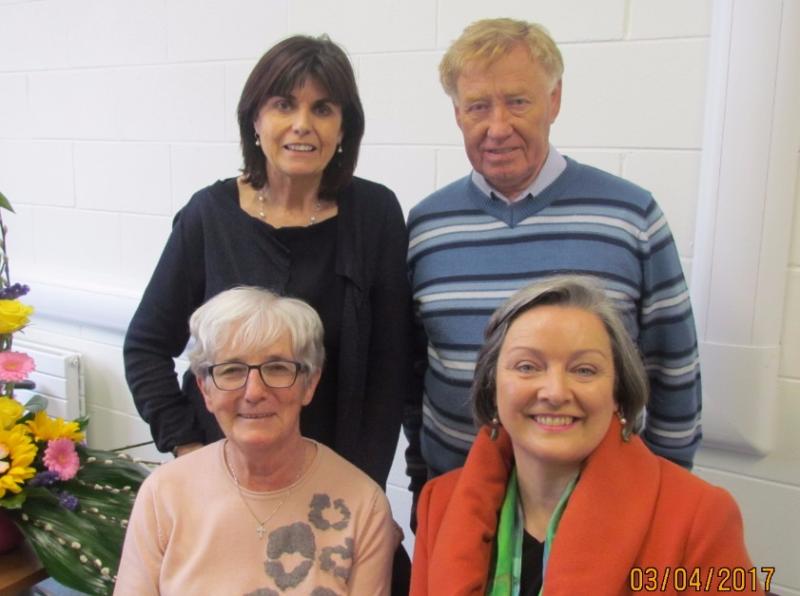 (Front) Mary Theresa Lynch (Chairperson of the Board of Management), Marcella Corcoran Kennedy. (Back) Principal Fionnuala Doheny and Tommy McKeigue

On Saturday, April 1, Scoil Mhuire Tullamore celebrated its 60th birthday. The celebrations were slighted muted however as an even more exciting landmark was about to take place on Monday 3rd of April, when Scoil Mhuire opened phase one of its state of the art transformation.

When Scoil Mhuire opened its doors in 1957 the school consisted of ten large classrooms, a cookery room, heated cloakrooms, and toilets upstairs and downstairs, an office, storerooms, a staff room and a large Assembly Hall. Scoil Mhuire soon began to heave under the demands of enrolment. Prefabs became a short term solution to accommodate the growing numbers of children and today that original building is surrounded by a satellite of 10 prefabs.

Opening the doors to phase one of this magnificent build has been a long road – with this vision first proposed as early as the 1980s.

The new school design is very innovative. This exciting new development has been designed by Tullamore resident and native Ross McNamara (McCarthy O’Hora Architects) who is himself a past pupil of Scoil Bhríde. Carroll and O’Keeffe are the builders and they are now busy revamping the original building and bringing it into the 21st century.

The completed design affords a vision which future-proofs the education of the pupils of both Scoil Mhuire and Scoil Bhríde. Incorporated within the proposed design are flexible and informal teaching spaces located off the corridor spaces in new ‘pods’ distributed along the length of the existing corridor.

The development schedule not only includes a school refurbishment and extension for Scoil Mhuire which will replace existing pre-fabs but it also includes  a safer new drop-off /collection area for pupils to include a turning bay. There will be enhanced play areas for both Scoil Mhuire and Scoil Bhríde, improved staff and visitor car-parking, new entrances and enhanced storage areas for both schools. There will also be enhanced access and vistas to the Town Park.

Scoil Mhuire can’t thank the parents and guardians enough for their co-operation during this time of change and upheaval. This is a very exciting time for everyone (especially the lucky pupils of Scoil Mhuire!) involved who look forward to the official opening of the completed project in autumn 2017.