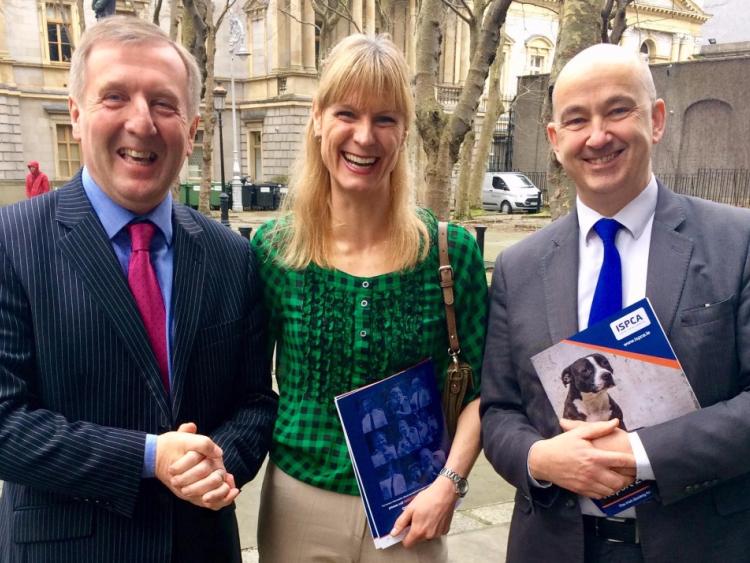 The Minister of Agriculture, Food and the Marine Michael Creed TD shares a joke with Pippa Hackett, Green Party Spokesperson at the launch of the ISPCA’s Inspectorate Report in Dublin last week. Pictu

Offaly Animal Welfare Spokesperson and the Agriculture spokesperson for the Green Party, Pippa Hackett was pictured with Minister Michael Creed, who she has been critical of, at the launch of the ISPCA's Inspectorate Report for 2016 last week.

The Irish Society for the Prevention of Cruelty to Animals (ISPCA)’s Inspectorate Report for 2016 was presented by Dr Andrew Kelly, and launched by Minister Michael Creed in Dublin last week. The ISPCA have been progressing steadily, and now have 8 inspectors covering 17 counties, but more are needed to deal with the huge number of calls they get each year, and in fact, they received over 16,000 calls to their helpline last year, it was revealed.

"We are fortunate to have an ISPCA inspector covering Offaly, but with each officer dealing with about 2,000 calls per year, and witnessing some horrific scenes, it is not for the faint-hearted. They are to be commended for the work they do,” said Pippa Hackett.

Pippa Hackett, who is also the Green’s Spokesperson on Agriculture, has also been critical of the Minister and his department in the past few months. “Some common sense needs to be applied to many of the aspects which are under the direction and control of the Department,” she stated. “I have highlighted several issues over the past few months, and I will keep highlighting them if there are no improvements in the situation.”

"All the data indicates that sales in the organic sector are on the up, both domestically and in Europe, and yet this government continues to ignore making new investment in this area. There has not been a scheme for new entrants for two years, and considering it takes 2 years to convert, we are feasibly 4 to 5 years away from having any new organic producers entering the market," Hackett commented.

"It would be a win-win for farmers and the environment, and with bitter debate in the Seanad of late on Minister Humphries’ Heritage Bill, it is clear that there is a strong desire among many of our landowners for more biodiversity, not less, and organic farms have been shown to have significantly more biodiversity than their conventional counterparts," she added on the issue.

Hackett also said that issues such as slurry spreading dates, which come up year after year, need to be addressed. "Hopefully this year the Minister will make the decision to apply some more flexibility to the closed periods. So rather than having fixed dates, an assessment of the land and weather conditions would be a more appropriate means of decision, and would be better for both farmers and the environment," Pippa Hackett insisted.

The delay in GLAS payments has also come under the scrutiny of the Green Agriculture Spokesperson in recent weeks. "This has been most unfair to the significant number of farmers who did not receive their payments when promised, and Minister Creed must ensure this is something that will never happen again. These agri-environmental schemes are vital to a greener Ireland, and delays in payment will do nothing to attract more into such schemes," she concluded.