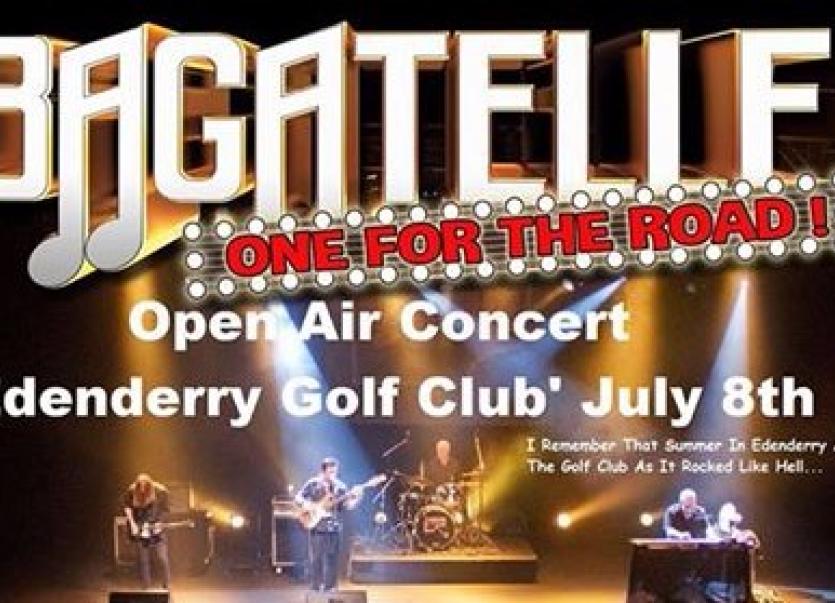 ‘I remember that summer in Dublin, and the Liffey as it stank like hell.'

The immortal words from one of the most enduring Irish songs of all time, Summer in Dublin, by Bagatelle. Now, for one night only, Offaly fans of the group can relive that anthem and other hits from the band who produced the likes of 'Second Violin' and 'Leeson Street Lady' during their prime in the 1980s.

Edenderry Golf Club are now able to announce that Bagatelle will play an open air concert at their club on July 8, a gig they are promoting with the tag line, 'I remember that summer in Edenderry, and the Golf Club as it rocked like hell.'

No doubt the place will be rocking as fans are snapping up tickets, and organisers are suggesting people do not wait to buy tickets or "you will be disappointed." They have reported a huge level of interest in the unique event.

Such is the interest in tickets that the golf club have immediately decided to run a shuttle bus service from the town square for the evening. This will allow anyone wanting to socialise on the evening to do so in a safe and responsible manner. The cost of the shuttle bus is just €2.00 per person so as to encourage as much use as possible. The gates of the golf club will open at 6pm, and Bagatelle are expected on stage around 8pm.

The committee have said that tickets are not just being bought locally as they are also being snapped up around the entire country, and in Scotland and England.

Club captain Martin Murphy is thrilled at this venture and sees it as an ideal chance to show to a wider audience the facilities which the golf club has to offer for special occasions like this.