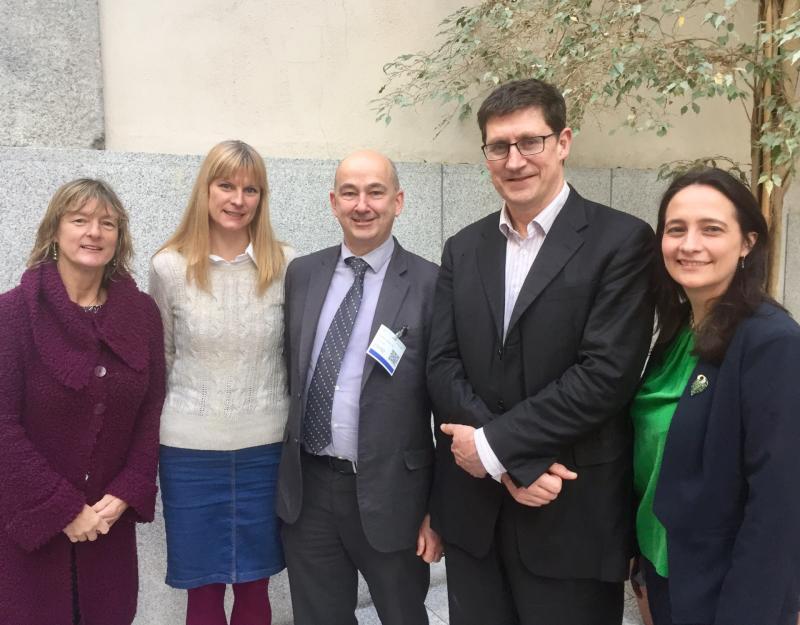 Offaly’s Green Party representative Pippa Hackett, who is also the Party’s Spokesperson on Animal Welfare, met with Dr Andrew Kelly, the CEO of the ISPCA at Leinster House last week.

Also in attendance were the Green Party’s Leader Eamon Ryan, Deputy Leader Catherine Martin and Senator Grace O’Sullivan. This was a productive meeting, and lengthy discussions took place on many of the important animal welfare issues that are important to both the ISPCA and the Green Party.

“Reports of animal cruelty are regularly in the news; anything from overcrowded puppy farms and wild animals in circuses, to poorly treated horses and abandoned pets,” commented the Offaly Green Party representative.

“Many incidences are due to ignorance and neglect, but sadly however there are also some malicious cases in which animals are deliberately mistreated and abused. Animal welfare is important, not only for the animals themselves, but also from a societal point of view. Research has shown that people who are respectful, responsible and kind to animals, also show similar characteristics towards other people, and other aspects of their lives.”

She continued, “there has been a welcome increase in animal cruelty convictions since the introduction of the new Animal Health & Welfare Act in 2013. While convictions like this may prove to be a deterrent for some, I would rather see fewer incidences in the first place. Better education, and an improvement in behaviour and attitude towards animals is crucial.”

She also pointed to a number of groups in the county while also outlining the responsibilities of owners.

“We have some wonderful animal welfare supports in Co Offaly, including the OSPCA & Offaly Dog Shelter. Responsible pet ownership (e.g. neutering and micro chipping of pets) would remove many of the welfare issues faced by the many hard working volunteers at these organisations. We all have responsibilities when it comes to our pets, and a trip to the local pound or animal rescue centre is recommended – it is certainly eye opening. Most of these charities rely on the public for donations, be it money, food or bedding, or simply some of your time by volunteering. Another way of helping is by fostering or re-homing an animal, and this is very worthwhile and fulfilling, We have rehomed a dog, two cats and two ponies, and they have brought much joy to our lives and that of our children.

“I look forward to working with the ISPCA and related organisations to improve the welfare of our animals, both in Offaly and beyond. If you come across any cases of animal cruelty, please ring the ISPCA on 1890 515 515,” Pippa Hackett concluded.