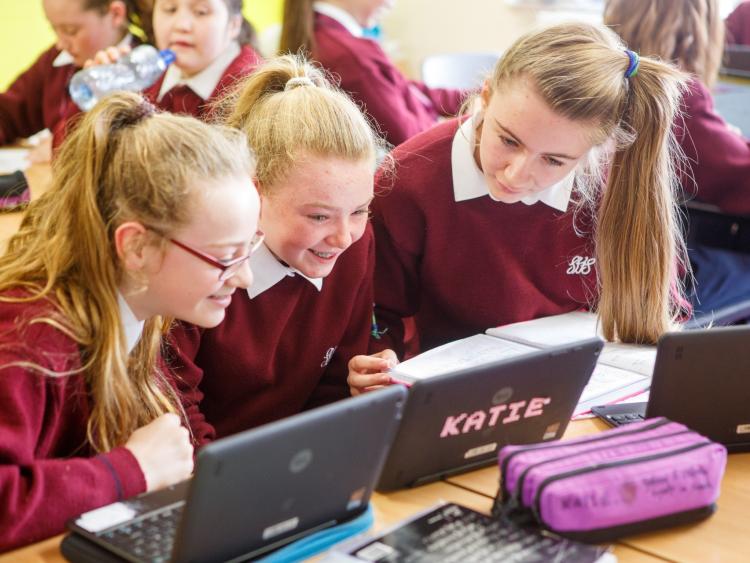 Some of the students embracing the new hi-tech learning environment

The Sacred Heart School inTullamore have been rewarded for their innovative decision to embrace the ‘digital schoolbag’ after they were recognised with the announcement that Microsoft have chosen the Offaly school as the country’s designated showcase school for the corporation’s ‘tablets in the classroom’ programme.

Delegations from three schools from various parts of Ireland have already scheduled visits to Tullamore next month to witness first hand how successful the move to the ‘digital schoolbag’ has proved for both pupils and staff at the Sacred Heart School.

“After many years of planning we decided to replace textbooks for the incoming first year students last September and fully embrace the digital schoolbag. The introduction of the tablet has been widely acclaimed and universally welcomed," Principal Pauline McKenna said.

"That Microsoft and their support company Wriggle have exclusively chosen the Sacred Heart, Tullamore as their ‘showcase’ digital school is a tremendous boost to us all. The Board of Management, staff and pupils see this as a vote of confidence in our school,” she added.

“Our students report the enjoyment of working with specialised materials and texts and the resources provided by the e-book far exceed that of the text book. We have seen that the digital model has dramatically altered staff and students’ access to knowledge and we believe that benefits can exceed the limitations imposed by textbooks. There is a perception that IT does not really work in the classroom but when you see what teachers and students here at the Sacred Heart School, Tullamore are able to achieve in terms of knowledge acquisition and critical thinking, it really is amazing,” she explained.

Acknowledging that there were ‘teething’ difficulties at the start, Ms McKenna said that she was particularly delighted that the quality teaching and learning that takes place in the school has merged so well with tablets in the classroom. “Many of the students love the fact that the class can be recorded and played back later at home – this is particularly helpful with homework assignment."

“The main problems in the beginning were associated with some e-books and charging the devices, but given the school now has a dedicated Digital team, composed of students, reflects that the students themselves are particularly adept at problem solving,” Ms McKenna said.

The Principal also said that subjects like Geography and History now “come alive” for the student at the touch of a button. A detailed survey involving parents and students was commissioned in December and there was an 85% positive response. Six years of planning and research has gone into the Sacred Heart School, Tullamore’s digital project and to date the Board of Management have invested €80,000 in the scheme.

“The support of the Board and their vision was a particularly important feature of the project because it’s a risk for any Board in a voluntary secondary school to invest such funds into a project that is so innovative. We recently had a German inspection and they cited the integration of IT in the classroom as one of the key features that ensured ‘high quality’ student learning."

The Principal also revealed that the “final part of the jigsaw” will see the school moving to a one hour class timetable from next September. “Extended classes will give the quality and depth to lessons that both staff and students need. We have spent three years planning and investigating the impact on student learning and we think this is an important feature particularly in light of junior cycle reform," she concluded.

The school has already closed admissions for September 2017 and will be organising a meeting for parents of incoming students in the coming weeks to discuss their daughter’s digital tablet.