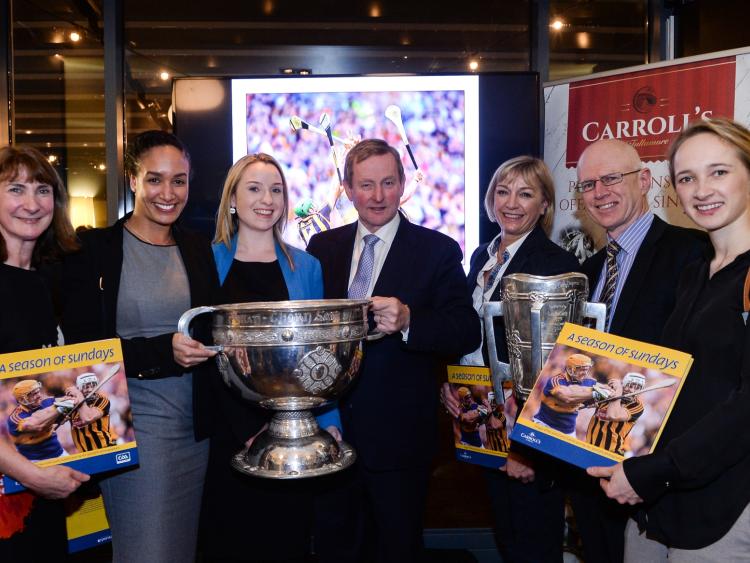 Over the past twenty years, Sportsfile’s ‘A Season of Sundays’ has become an eagerly awaited GAA tradition, marking the end of each season with a stunning collection of images. The book is again sponsored by Carroll’s of Tullamore.

An Taoiseach, Enda Kenny TD joined Ray McManus and his team in The Croke Park Hotel to celebrate the 20th edition of the annual collection.

This year’s book captures the highs and lows of the season in another colourful and intriguing look back at the year. A year which saw some remarkable hurling matches, including Clare’s last minute comeback to de-throne Waterford and win the National League title. It also documents Tipperary’s fine run to win the Liam MacCarthy Cup with a great image from the final win over Kilkenny adorning the cover of this year’s book.

In the football, Jim Gavin and Dublin’s march continues with their fourth consecutive National League title followed by back-to-back All Ireland titles, a feat that was last achieved in 1977. The Dub’s replay win over Mayo left the green and reds waiting to end the famous drought, now about to enter its 66th year.

Sportsfile was also on hand to capture Sinead Aherne's last gasp penalty as the Cork ladies beat Dublin by a point to win a remarkable 11th All Ireland Football title since 2005. While in the Camogie, Kilkenny ended Cork’s three in a row attempt, winning their first O'Duffy Cup in 22 years.

Speaking at the launch, the book’s creator Ray McManus said, “It’s hard to believe this year marks our 20th collection. Since 1996 we have captured thousands of iconic images and I’m proud of every book. Once again I would like to thank my highly skilled team as we look forward to our 21st next year!”

John Comerford, COO of the book’s sponsors Carroll’s of Tullamore stated, “At Carroll’s we are delighted to be sponsoring A Season of Sundays again as they mark the 20th year of this great publication. As Ireland’s favourite ham brand our association with GAA is well-known through our sponsorship of the Offaly teams, and we are proud of our long-standing partnership with ‘A Season of Sundays’. I wish to congratulate Ray and his talented team on another fantastic edition and I look forward to the moments they will continue to capture in our next GAA season.”

An Taoiseach, Enda Kenny TD commented, "The GAA season is not fully complete until Ray McManus' A Season of Sundays is in the shops.  The book celebrates its 20th anniversary this year and is a must for all sports fans.  Every year Ray and Sportsfile capture the iconic pictures of the GAA season -  the triumph, the skill, the passion, the colour and indeed the heartache.  When you pick up any of Ray's books at any given time you are inevitably transported back to a magic and memorable sporting moment.  Ray, and a Season of Sundays, have become an integral and unmissable part of our national games."

Uachtarán Chumann Lúthchleas Aogán Ó Fearghail said, "A Season of Sundays and its annual publication is a staging post in our season and reminds us of the passing of another year. Year-in, year-out, it vividly captures the allure and reach of our games - from January right through to the conclusion of our championships. It is eagerly anticipated by many and accompanies many year-end reviews. Congratulations to Ray and the Sportsfile team for capturing so much of our year in such a unique and well-presented fashion, and here's to many more."

The book is enhanced by GAA Head of Communications, Alan Milton’s perceptive caption-writing. It would make the perfect Christmas gift for any GAA enthusiast, retailing at €24.95 from bookstores nationwide and online at www.sportsfile.com.