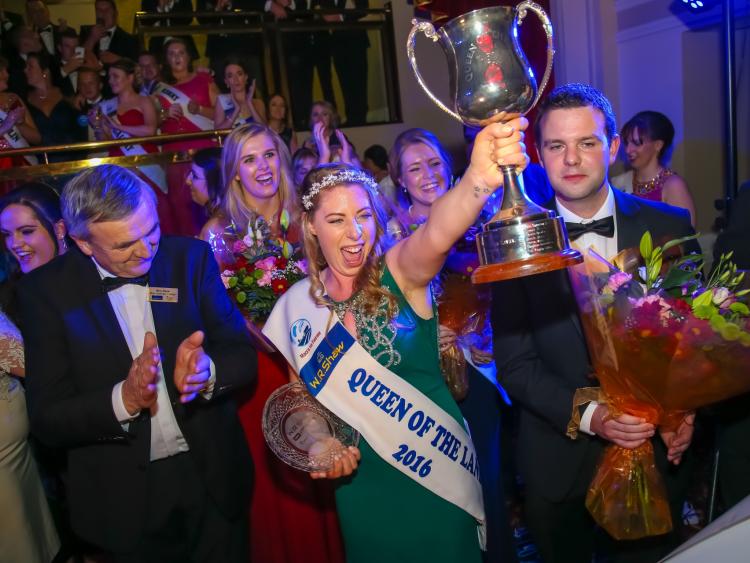 : Karen Elliffe from Westmeath was crowned the W.R. Shaw Queen of the Land for 2016 with Billy Shaw of W.R. Shaw and Shane Gonoude, her Escort: Photography by Paul Moore

The 52nd annual W.R. Shaw Queen of the Land Festival, which took place in the Bridge House Hotel, Tullamore over three days from 11-13th of November has once again proved to be a resounding success.

The W.R Shaw Queen of the Land Festival were proud to announce Karen Elliffe as the Queen of the Land for 2016. Karen hailing from Ballinagore in Westmeath was overwhelmed when the announcement was made. Karen paid great tribute to her family and fellow contestants who had made it the ‘most memorable weekend ever’ and especially thanked the Queen of the Land committee for making each one of them feel special.

Karen comes away from Tullamore with the prestigious W.R. Shaw Queen of the Land title and the Linda O’Brien tiara that accompanies the title, a specially commissioned piece of Galway Crystal from Cahill Jewellers, €1,000 sponsored by W.R. Shaw, a two-night break in the Bridge House Hotel, €200 clothing voucher from Kode Clothing. Aoife Dooner from Kildare took first runner-up and Hannah Barton from England took second runner-up.  Chris Manley was selected by the Queens as best escort and receives a €200 voucher for Guy Clothing and a weekend break in the Central Hotel.

Contestants were judged on a range of attributes including for appearance, dress sense, rural knowledge and elocution. The festival, which has grown from humble beginnings, is now one of the most prestigious events on the Offaly social calendar. Huge crowds attended this year’s festival from all over Ireland due, in no small part, to the fantastic line up of entertainment and 32 entries from all four corners of the country along with our English, Scottish and Northern Ireland Queen.

On Friday morning, the Queens went on tours to Clonmacnoise, Tullamore Dew and ended the night with entertainment from Ultrabeat followed by dancing in the Palace Nightclub.

Saturday morning the Queens were interviewed by the judging panel composing of Christine Buckley reigning W.R. Shaw Queen of the Land 2015, Billy Shaw of W.R. Shaw and Anna-Marie McHugh National Ploughing Association and Queen of the Land from 1989. On Saturday night, the Queens were put through their paces on stage by MC Frank Forde, Comedian and impersonator, and danced the night away to The Greatest Day, Legacy and Joe Wynne.

On Sunday, after a day of pampering in Ritzy’s Hairdressing and Olivia’s Beauty Boutique nerves were beginning to show for the winner’s announcement at 12 midnight.

Announcing the winners, judge and reigning Queen Christine Buckley complimented the Queens for being excellent ambassadors for their clubs and counties and wished the 2016 Queen well for the coming year. Gerard Mahon, chairperson of the committee, paid tribute to the 32 girls who took part and said, “The committee is very much looking forward to working with Karen during the year. She will make an excellent Queen of the Land.”  According to Gerard, “We have had another successful Queen of the Land festival, thanks in no small part to our main sponsors W.R. Shaw, the associate sponsors, committee and the many supporters that came from all over the country and beyond to Tullamore for the weekend.”