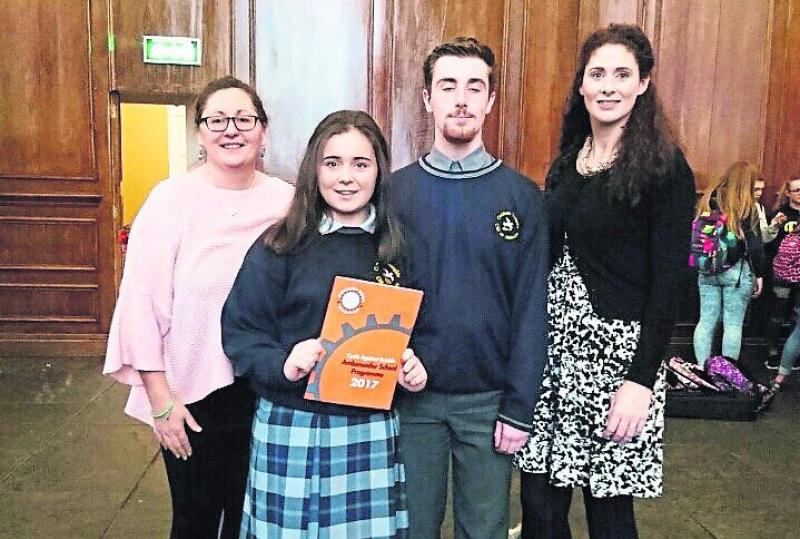 Coláiste Íosagain in Portarlington has received the Cycle Against Suicide, Ambassador School Award, in recognition of the school's support of positive mental health promotion.

Teachers Ms Nolan and Ms Browne, on behalf of the wellness team, with students Alex Butler and Leah Cooney, collected the award on September 23 at a ceremony in the Royal Hospital, Kilmainham.

It was one of 83 schools around Ireland who completed the Ambassador School Programme, a Cycle Against Suicide initiative which is school-led. It involved the completion of “Five Gears” over a year, aimed at spreading the message “It’s OK not to feel OK; and it’s absolutely OK to ask for help”.

“It was wonderful to attend such a positive event, and have the efforts of the students recognised. Our participation in the Ambassador School Programme had an enormously positive impact in our school, fostered a school-wide approach to the promotion of positive mental health, and provided incredible opportunities for student leadership”, said Ms Nolan.

“This is a hugely important issue that affects so many families,” he said.

Founder of Cycle Against Suicide is Jim Breen who commented, "I’d like to thank each of the schools for their extraordinary commitment to breaking the cycle of suicide on the island of Ireland.

Each of them has gone the extra mile to raise awareness of our message, empowering themselves and others to build resilience, and seek help when necessary. They are changing the mind-set, behaviour and culture of an entire generation.”
www.cycleagainstsuicide.com .