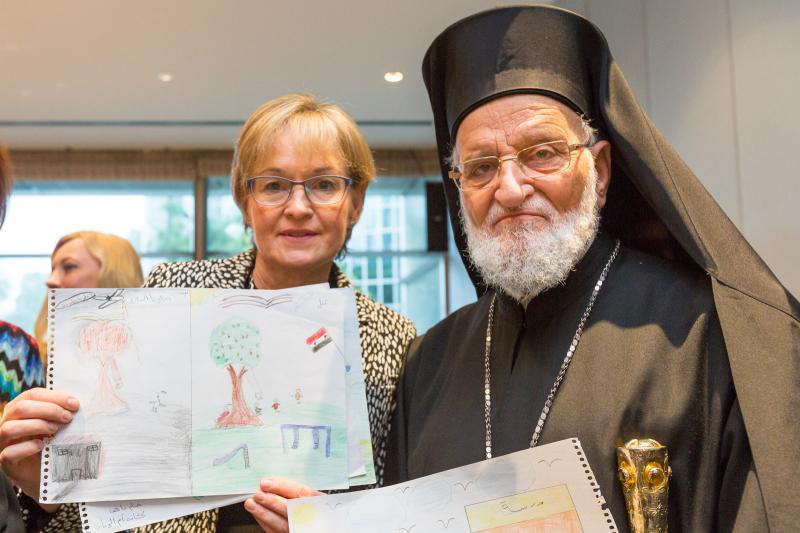 Mairead McGuinness MEP is pictured with the Patriarch of Antioch and All the East, and Alexandria and Jerusalem, His Beatitude Gregorios III Laham

Mairead McGuinness MEP and Vice-President of the European Parliament has met with Patriarchs representing the three Christian churches in Syria, calling for peace in Syria.

The religious leaders brought letters and drawings from Syrian schoolchildren with them who have called for an end to war so they can return to school safely.

"Today, I and other EPP Group MEPs met with the highest ranking representatives of the Christian churches in Syria - Melkite Catholic, Syrian Orthodox and Greek Orthodox. They called on the EU to raise its voice and press the international community to speed up the process of finding a peaceful solution to the conflict," McGuinness said.

Over 15,000 children have died in the Syrian war according to the Syrian Observatory for Human Rights (September 2016). 2,960 schools have been destroyed in the war and 2.1 million Syrian children are unable to attend school now due to the conflict that has been ongoing for over five and half years. Many children are traumatised and are not only victims of direct acts of war, but also of abduction, torture and sexual exploitation and many been orphaned by the conflict.

"The appeal for peace is a joint initiative involving around 1 million Syrian children of both Christian and Muslim faith, organised by Catholic, Orthodox, and Protestant Christians in Syria with the support of members of all other religious communities in Syria. The aim is to raise awareness of the plight of children in Syria and their plea to end the conflict. The religious leaders stressed that Muslims are not at war with Christians in Syria despite the emerging narrative in some reports and that everyone is affected by the conflict.

"The EPP Group calls on all sides to end the bloodshed in Syria and bring peace to the region so that reconciliation can begin, with the help of interreligious dialogue in the communities," McGuinness added.