Largest festival of Maths in the world is coming to Offaly 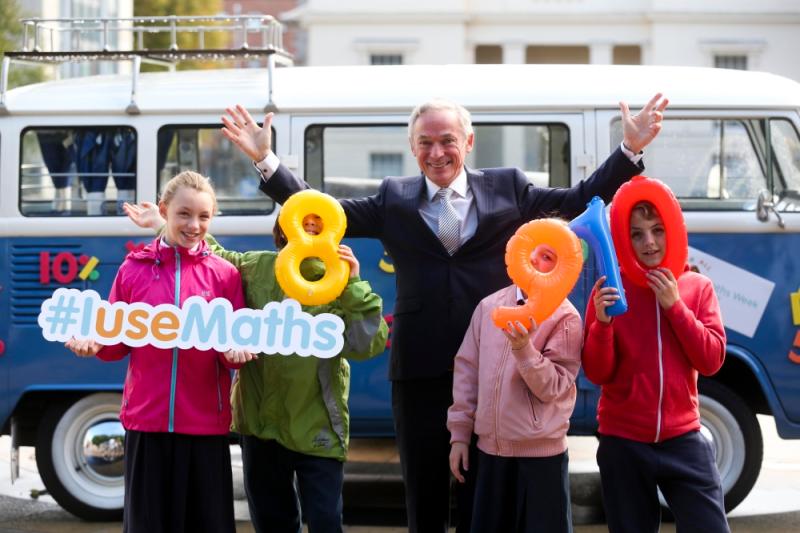 The countdown is on as over a quarter of a million people are expected to take part in the largest festival of maths in the world, Maths Week Ireland 2016.

The week kicks off on Saturday 15th October and runs nationwide until Sunday 23rd October. To find out what is happening in Offaly log on to www.mathsweek.ie or follow @mathsweek on Twitter.

World renowned and locally acclaimed mathematicians will entertain people of all ages with the wonder of maths over the week through fun and interesting talks, games, teasers, challenges and magic maths shows.

Launched today by Minister for Education and Skills Richard Bruton and children from Rutland National School, Sean McDermott St, events will take place all across the island during the week.

The all-Ireland event is run in conjunction with partners including Science Foundation Ireland, the Department of Education and Skills, universities, institutes of technology, teacher training colleges, visitor centres, libraries other groups and employers both North and South.

Launching Maths Week Ireland 2016, the Minister for Education and Skills, Richard Bruton T.D. said, “Events such as Maths Week have a significant role to play in both the promotion and understanding of maths and the wider STEM agenda among young people today. With widespread recognition of the importance of maths for the future of our graduates, it is crucial that we encourage a positive attitude towards maths, making it accessible to all. Over 250,000 people of all ages are expected to attend maths events throughout the week, I would encourage people to get involved and wish all those taking part every success.”

Dr Ruth Freeman, Director Strategy and Communications, Science Foundation Ireland, said “We are delighted to support Maths Week 2016 which is now the premier mathematics event on the calendar. Maths Week has gone from strength to strength and this year there are even more events and activities taking place throughout the week. Maths underpins many exciting career avenues; it is a skill that is needed in today’s world, and one that everyone should feel able to develop.  It is for that reason that Science Foundation Ireland is delighted to see Maths Week support the development of a positive attitude towards Maths in Ireland.”

Highlights of the week include:

·         Maths workshop for teachers, parents and the public

·         Douglas Buchanan,  Bubblz the mathematical clown, Robin Wilson, Kjarton Poskitt are only a few of the other names that are part of Maths Week this year

Eoin Gill, Maths Week Ireland Co-ordinator said, “Over the past ten years we have had over 1 million people engaging with Maths Week Ireland, mainly primary and post-primary children, while helping them to have a more positive attitude towards maths.

“We’re delighted to celebrate the 11th annual Maths Week and to see this festival growing to the largest in the world.  It’s a true partnership of people working together for a common aim -  a very important aim - to promote mathematics for all. We started with just 13 partners and now we have over 50 groups including all of the universities and institutes of technology, teacher training colleges and many professional groups and visitor centres providing events and activities for all.”

“Maths Week shows what we can achieve through a concerted effort by all working together. There is widespread realisation that improving Ireland’s proficiency of mathematics is vital for future wellbeing and it’s heartening to see a great improvement in interest in maths among our young people and Maths Week will continue to foster that interest as we enter our second decade.”

Eoin Gill added that the support of sponsors is central to the success of Maths Week.

Co-ordinated by Calmast at Waterford Institute of Technology, Maths Week Ireland is run as a partnership of over 50 public and private sector institutions and groups, including the universities and institutes of technology, professional bodies, libraries and visitor centres who are committed to promoting an interest in mathematics, as well as many of Ireland’s flagship employers. It is an all-island event.