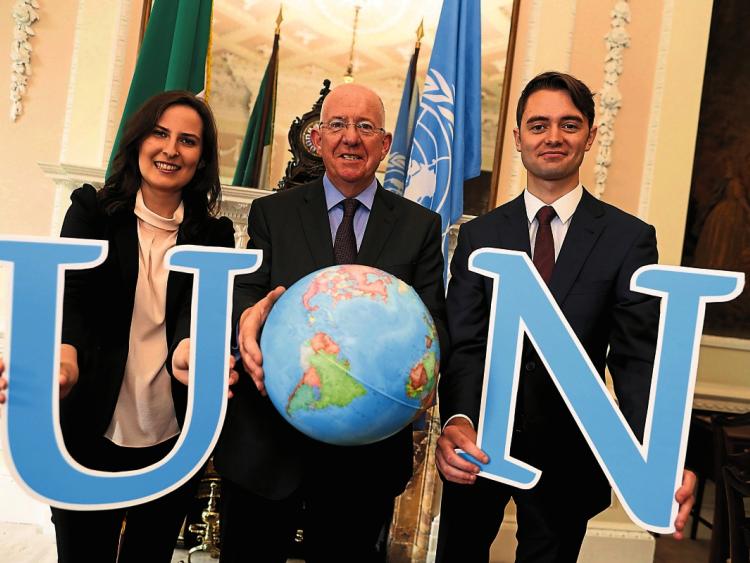 Laois TD and Minister for Foreign Affairs and Trade Charlie Flanagan has the honour of representing Ireland this week at the United Nations in New York.

Minister Flanagan has begun a busy programme of engagements in New York where foreign ministers from around the world have gathered for the United National General Assembly.

During his visit, Minister Flanagan will address the United Nations General Assembly and meet with UN Secretary General Ban Ki-moon. He is also due to undertake a series of meetings with foreign ministers from around the world at the General Assembly, as well as participating in an EI trade event, delivering a keynote address at Fordham University on Ireland and the EU, and engaging with the Irish community.

The Minister will begin his visit to New York by hosting a business breakfast meeting with Enterprise Ireland and a number of its client companies active in the US market.

Also on Monday Minister Flanagan was due to deliver a keynote address on “Ireland and the European Union in Changing Times” at the School of Law of Fordham University. He was due to underline that Ireland is “wholeheartedly committed to our membership of the European Union and of the Eurozone” and emphasise the attractive environment that Ireland offers US investors.
Minister Flanagan will also speak to the audience at Fordham about the diverse range of markets with which Ireland now trades.
Speaking ahead of his departure for the UN, Minister Flanagan said Ireland’s commitment to the principles and values enshrined in the United Nations Charter remains at the heart of the country's foreign policy and the annual UN General Assembly provides a valuable opportunity to set out Ireland’s priorities and to engage with international partners.
“Ireland is particularly active in both UN peacekeeping and in tackling hunger and poverty. In my address to the UN General Assembly, I will highlight the fact that conflict and deprivation are key drivers of the current migration crisis. The community of nations needs to work together to address the root causes of migration and the UN has a critical role to play in this regard.
“Today’s migration crisis resonates with Ireland’s own sad history of emigration and I will be emphasising the need for the international community tackle the root causes of the migration crisis, rather than focus on addressing the symptoms of the problem,” saaid Minister Flanagan.
He is also due to meet many key Irish-Americans.