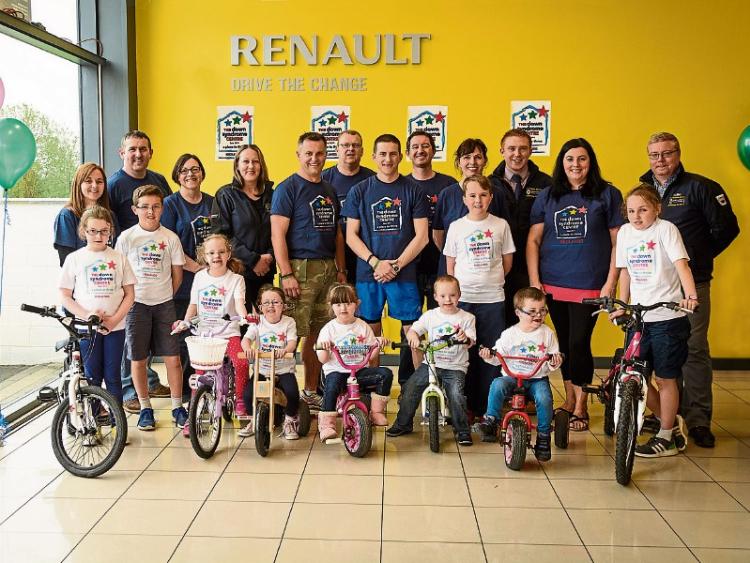 A new Midlands branch of the Dublin based Down Syndrome Centre, has received a €15,000 kickstart thanks to four lads who cycled the length of Ireland for it.

Brothers Anthony and Noel Mallon from Joe Mallon Motors in Portlaoise, with friends Malcolm Weston from Ballybrittas and Declan Nolan from London, took on the epic 700km challenge despite not even being regular cyclists.

“We’re not cyclists. We don’t cycle in a club, We had bikes from the bike to work scheme. Last year for a weekend away we did 150km in two days. We didn’t have time to train really, so we knew it was going to be a challenge,” Anthony said.

He had been approached by parents Lynda and Dave Murray for support in starting the centre, which is planned to open in January in Portlaoise, to offer therapies to children with Down Syndrome in Laois, Kildare and Offaly.

“It’s a massive area that I think goes unrecognised. I suggested the challenge to the lads and that’s how it started, as an adventure,” he said.

He kitted up a van from the garage into the ‘A Team’ support vehicle, set up a fundraising page and got going just three weeks later from Malin Head in Donegal, during the hottest spell yet of 2016, on June 1.

However supported by their volunteer van drivers and families waiting at each stage, the lads made it to Mizen Head in Cork on day four, having cycling a total of 743 km.

“That day was by far the hardest, cycling over the Caha Pass. Dave and Lynda were there to meet us, and their daughter Leah, and our own families, I couldn’t hold the tears back to see Leah on the finish line with her thumbs up. I’m delighted we did it,” said Anthony.

His fundraising target of €5,000 was blown out of the water, with support coming from his home county of Kildare as well as Laois..

As for taking to the road since on his bike, the garage owner is not interested.

“I never want to see a bike again,” he said laughing.