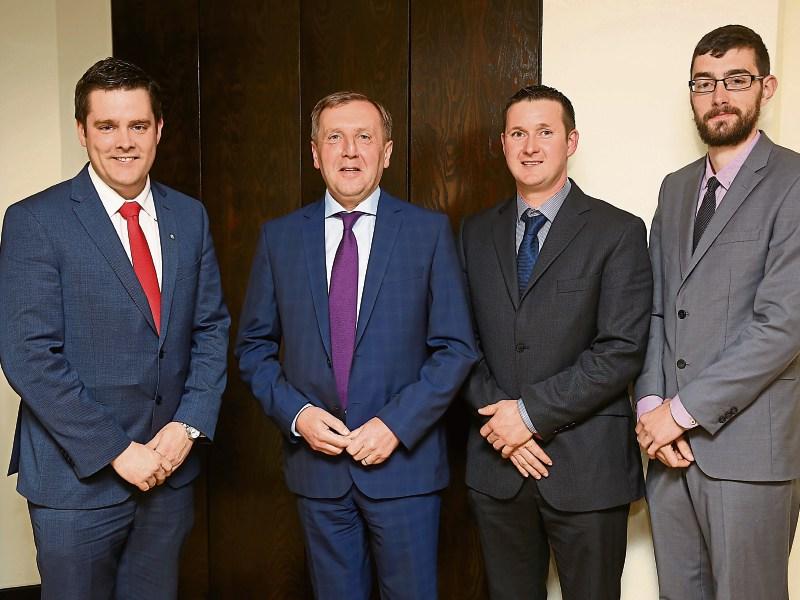 Macra na Feirme National President Seán Finan last week led a delegation to meet with the new Minister for Agriculture, Food and the Marine, Michael Creed and his officials at Ag House in Dublin.

Macra na Feirme updated the new Minister on their current programmes which are offered to young farmers including the Land Mobility Service which continues to grow and now has over 500 clients and 200 collaborative farming arrangements in place.

They also detailed the Young Farmer Skillnets training programme which is growing steadily and offering further practical training courses to young farmers to equip them with the further skills they need for a successful career in farming.

Speaking at the meeting Macra na Feirme National President, Sean Finan said that, "The agri tax review which Macra na Feirme contributed to, as well as recent tax changes to incentivise long term leasing of land has helped the mobility of land and we acknowledge the governments work in this regard.”

Seán Finan highlighted the issues which young farmers face at the moment and some of the areas Macra will be working on with the Minister during his term of office for the betterment of young farmers and their businesses.

Some of the main items discussed at the meeting include:

● The current income crisis and pressure young farmers face at the moment across the sectors including dairy, tillage and pigs.

● The availability of a National Reserve in 2016 and how Macra is seeking a commitment from the Minister on the provision of a young farmer national reserve every year for the duration of the current CAP.

● Delays in approval for young farmers who applied for TAMS2 grants. Macra welcomes the confirmation by the Minister and his officials that approvals have started to issue this week but highlighted how the delays to approvals is totally unacceptable and could not be allowed to continue.

● Access to affordable credit for young farmers and availability of European Investment Bank funding. The Minister confirmed that the Department are proceeding with an ex-ante assessment.

● The issues with new entrant parent partnerships not being recognised in both the old CAP and new CAP.

● Macra na Feirme received an update on seeking recognition for the "Forgotten Farmers" as a group with specific disadvantage.

● The resources to Teagasc to provide distance learning and online agricultural courses to young farmers was also discussed.

Finan concluded “we welcome the commitments by the Government and the significant emphasis on supporting the next generation of farmers in the recently published programme for government and we look forward to continuing our work with the Minister, his officials and the government for the betterment of the livelihoods of young farmers."