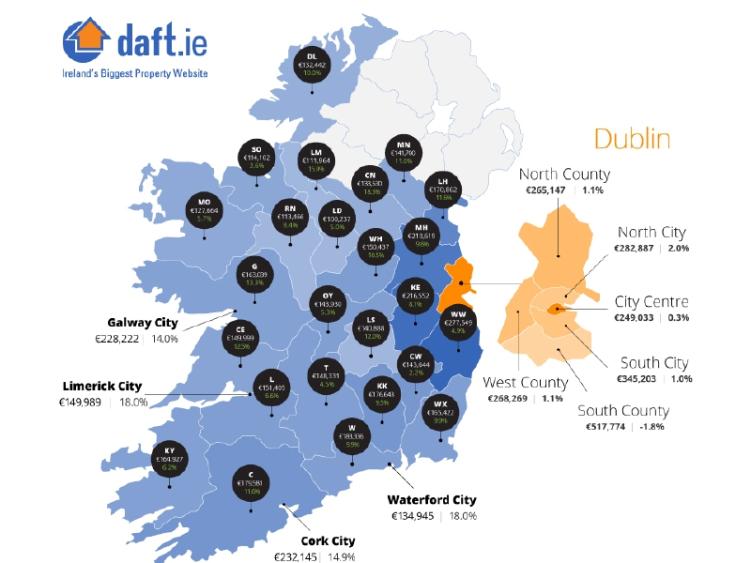 House prices in Offaly, were 5% higher than a year previously, compared to a rise of 11% seen a year ago.

According to the latest House Price Report released by Ireland’s largest property website, Daft.ie , the average house price in Offaly is now €144,000, 19% above its lowest point.

The figures are for January and March 2016 compared to the same period in 2015.

House prices rose by an average of 5.9% nationally in the year to March 2016, . The divide between Dublin and the rest of the country persists, with prices effectively stable in the capital – rising just 0.9% in the last year – compared to a rise of 9.7% on average outside Dublin. In almost all parts of the country, however, inflation now is less than three months ago.

While prices are stable in Dublin, they continue to increase strongly in other cities. Compared to the same period in 2015, prices in the first quarter of 2016 were 14.9% higher in Cork, 14% higher in Galway and 18% higher in both Limerick and Waterford cities. Inflation outside the cities varies from 8.3% in Leinster to 10.4% in Connacht-Ulster.

The total number of properties for sale at any one time continues to fall. At less than 24,000, this is now at its lowest point since February 2007. The biggest falls in availability are now occurring outside Leinster. Across Munster, Connacht and Ulster, there were 13,500 homes for sale in April 2016, compared to almost 21,000 two years previously.

Commenting on the figures, author of the Daft.ie Report Ronan Lyons said: “It is interesting to note that in year-on-year terms, prices are now falling in five Dublin markets – Dublin 2, Dublin 6, Dublin 16, Dublin 18 and South County Dublin. These are some of the most expensive markets in the country and show the effectiveness of the Central Bank rules. Nonetheless, across the country, prices continue to rise, because the increase in population each month is not being matched by an increase in new homes. Addressing the shortage of supply – in particular the high cost base on construction – must a top priority for the new Government.”

The full report is available from http://www.daft.ie/report and includes a commentary by Ronan Lyons, Assistant Professor of Economics at Trinity College Dublin and author of the Daft.ie Report.