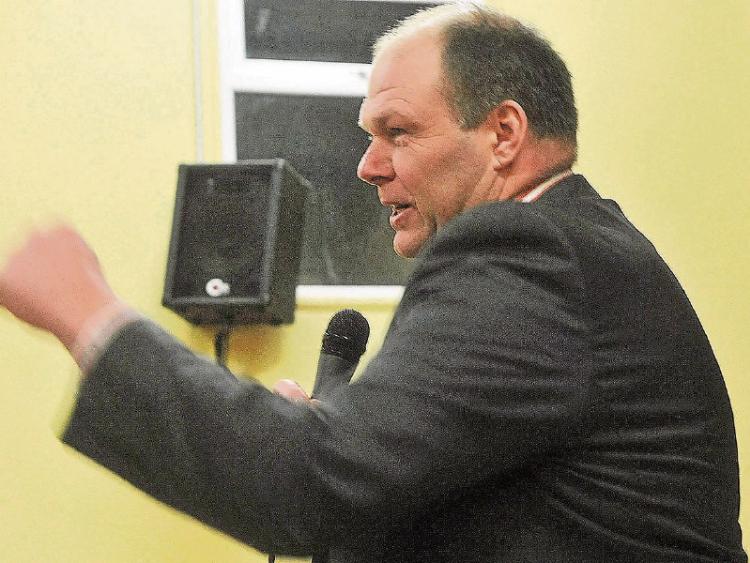 Up to 150 people in Mountmellick’s Macra Hall in support of IFA candidate Henry Burns proved Laois has the energy for another presidential election campaign.

The event, organised by the Mountmellick IFA local branch and Macra na Feirme was designed to assess interest in his home town to get behind Burns, who will need a strong local team to mount a successful canvas in 26 counties.

Helen Dempsey, chairperson of Mountmellick Macra, said Mr Burns had been a dedicated member of both organisations since the early 1990s, when he was assigned to be the Macra club’s delegate at county IFA meetings.

She said it would be fitting if Mr Burns, who had “fought tirelessly for the organisation he loves,” could bring about “real, tangible change.”

Describing him as a capable leader with a strong work ethic, she said it was his “commitment and down to earth attitude which makes him approachable to all.”

IFA county chairman Pat Hennessy said the organisation is still reeling from recent “unacceptable” pay controversies, but added that people on the ground realise a strong organisation is needed to act on behalf of farmers nationally and Europe.

The IFA is the envy of international farming organisations and Burns is “the man to pick the organisation up,” he said.

The candidate's campaign manager Francie Gorman said the role of president “isn’t a training school” and after the turmoil of the last three months, IFA needs a serious farmer in the role.

“We need someone 365 days for four years if we’re to get back that respect. As a farmer, I want to see the best man for the job – I’m selfish,” he said. “And Henry is head and shoulders above the others.”

Mr Burns said he’d been devastated and demoralised by those same controversies.

“We were misled. We trusted and trust will have to be regained,” he said, adding that the organisation is not at full strength now.

“We’re curtailed on the decisions we can take because of the state of the organisation,” he said, adding that he wants to pull the members together.

He referred to Juan Greene who started the IFA in 1965 “for no reward.”

“We have no say unless we stand together, said Mr Burns, adding that he was humbled by the support of the large audience from Portarlington, Clonaslee, Clonaghadoo and Mountmellick. “I won’t take it for granted”.

Kieran McEvoy, Portarlington, said he’d been immensely proud to see how Mr Burns chaired a meeting in Brussels and described him as a hard-working, honest, genuine person.

Paddy Delaney, Timahoe, said he had left IFA because of issues relating to malting barley contracts but is returning to support Burns. He hoped the Mountmellick man would make young farmers of a core part of his policies.