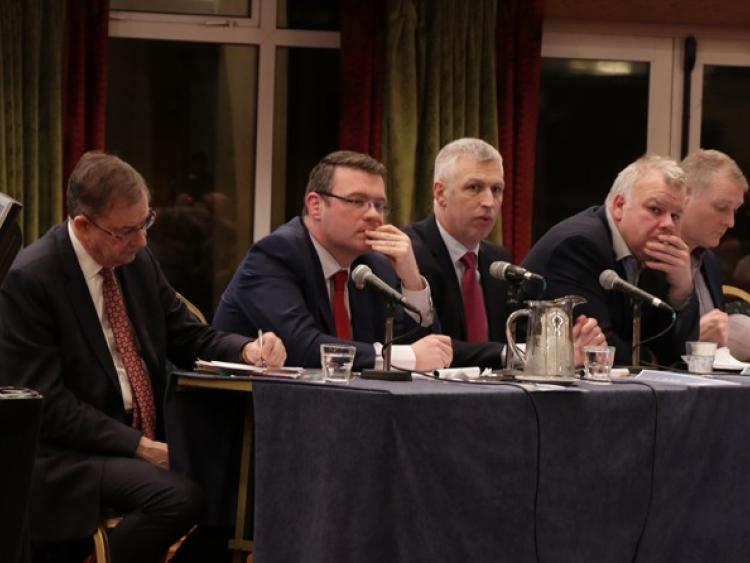 Fears were expressed that rural Ireland will be “forgotten about” in the National Planning Framework (NPF) 2040 at a meeting last night in the Hodson Bay Hotel, Athlone.

Organised by the Coalition Against the National Planning Framework, the meeting was attended by in the region of 300 local representatives, business owners, farmers and members of the general public from across the Midlands-West region.

The coalition called for a significant overhaul of the plan in order for it to better serve the country as a whole. The first speaker of the night – deputy Kelly – explained that this should be a plan for everyone right across the country.

“Aligned with it is the capital plan; the plan for where we are going to spend billions into the future in relation to vital infrastructure – which will decide where people live, where they go to school, what health services they have, where they work and everything else,” he said.

The Labour TD was clear to say that the NPF is actually a good thing; but, he explained that the plan in its current draft will not work for Ireland as a whole.

“There is one myth I want to kill here and now. This is not about being anti-Dublin or anti-urban; this plan is equally as bad for Dublin as it is for rural areas. This plan isn’t ambitious enough, it’s quite generic and it lacks a vision,” he said.

One of the other four TDs at the top table, deputy Fitzmaurice described the turnout at the meeting as a “statement of intent” in relation to rural concerns regarding the NPF.

The rural TD pointed out that there was political representation from 14 different counties at the meeting.

“That tells its own story; that tells us that there is a genuineness of people wanting to come together to make sure that this is done right.

The independent TD explained that the statistics in the current draft plan indicate that 50% of all the extra people going forward will live in cities, that 23% will live in larger towns and that 16% will stay in rural Ireland.

"It is projected in the draft that 50% of all new homes will be built in cities," he added.

"The reality of the plan in its present form is that you can draw a line from Dublin to Galway, seemingly the counties north of that don’t seem to exist.

“There is an opportunity now, going forward, for this to be got right,” he said.

“In my opinion, and I’ve always said it, I wouldn’t swap my life for any minute; because, living in rural Ireland is one of the greatest freedoms and one of the greatest places you can live. It’s not a handout we want – no one ever looks for that – it’s a hand up. It’s to try and be given the opportunity to make sure that the next generation can work in rural areas. We need to make sure that socially and economically it is viable,” he continued.

The independent TD outlined that the decisions made in relation to this plan will define the success of this Government.

Meanwhile, Fianna TD Eamon O Cuiv stated that rural Ireland has huge potential – but, that this plan is designed to inhibit that “enormous potential."

Referencing author John Healy, deputy O’Cuiv said: “It’s time to shout stop. Maybe in the past we didn’t all shout stop together; but, this time we must – because, the train is leaving the station."

"I think it’s time we asked ourselves a fundamental question. Are we running this country to grow an economy, or do we grow the economy to serve the people?"

Commenting on infrastructure, he added: “The reality is that if they just gave us the rural broadband and proper mobile service, you’re as connected looking over the Atlantic as you are in the city to the whole world."

He added that Ireland’s cities are struggling to cope with their populations, housing issues and traffic congestion at the moment – with the draft plan looking to encourage these cities to become even larger.

‘We See Our Children Doing Better Somewhere Else’

Also speaking at the meeting, was Sinn Fein TD Martin Kenny. He rued the fact that young people who grew up in rural Ireland have been forced to emigrate to find work – and will continue to do so if action is not taken.

“I have four children and they’re all teenagers. Most people around me when they rear their children hope they get educated and hope they do well.

"All of us look for in life that our children will do better than we do; that’s our ambition. But, where I live – in rural Co. Leitrim – we see them doing better somewhere else, not here.”

“That’s the problem for many people in many places, and that needs to change. We need to see a future for our children where we are,” he said