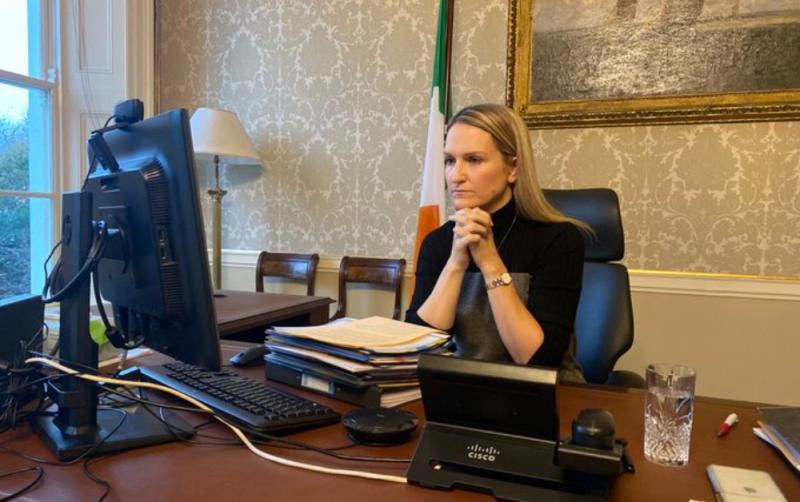 The Minister for Justice Helen McEntee has made a powerful statement in the Dáil in the wake of the murder of Ashling Murphy. She has vowed to enact change to tackle the issue of violence against women and also made a plea to men to "stand with us" to ensure a cultural shift.

Here is her statement to the Dáil in full:

"The past week has seen people across the country mourn the loss of Ashling Murphy, the beautiful young woman who represented the best of us.

We all stand in solidarity with Ashling’s family, her boyfriend and community and I offer my deepest condolences to them.

The many strands of her cruelly short life were brought together yesterday in her funeral which was distinctly Irish.

The wonderful music which reminded us of her talent.

The support of the communities of Mountbolus, Blueball and Tullamore.

The pupils from her school in Durrow, her camogie teammates and so many others.

But I was struck in particular by a collection of photographs of Ashling living life to the full.

Photographs of happy occasions when generations of the same family and community were around the same table.

There were Snapchat posts of Ashling and her friends out together.

Others of them travelling and discovering the world for themselves.

What we saw in those photos was a tapestry of the best of all of our lives, moments which are familiar to us all.

Perhaps that is why Ashling’s murder has touched us all deeply.

In Ashling, we see our sisters, our daughters and our mothers.

In her family, we see our own.

And as women, we see ourselves and feel an anger and fear that is all too familiar.

I am sure I was not alone in this House this week in having cried for Ashling, but also for Urantsetseg Tserendorj and Jastine Valdez, and Ana Kriegel and Nadine Lott, and so many others.

That is why we stand in solidarity and anger, but also in quiet determination.

That is why we must all work together to achieve a shared goal of zero tolerance of violence and abuse against women.

I have prioritised this issue since becoming Minister for Justice, but I know much more needs to be done.

The solutions will not come from legislation alone, nor can we tackle domestic, sexual and gender based violence by treating it is simply as a criminal justice issue.

What is required is societal and cultural change.

We will have failed if we allow some men develop such unhealthy attitudes towards women which lead them to commit a crime and enter our criminal justice system.

As the Taoiseach has said, I am leading the development of the third national strategy on domestic, sexual and gender based violence.

We have been working on this strategy for a year, and we listened to those in the sector who work on the frontline. And I am so grateful for their work, their support and their contributions.

We listened to victims and survivors.

It will have input from across government – such as the Departments of Equality, Education, Higher Education, Housing, Social Protection, Transport and others – and State agencies.

It will be underpinned by clear actions, timelines for reform and robust accountability mechanisms. It will be resourced as it should be.

It will be built on four pillars: Prevention, Protection, Prosecution and Policy Co-Ordination.

Its goal is clear: zero tolerance of violence and abuse against women.

To prevent violence and abuse against women, we must eradicate the social and cultural attitudes which make women feel unsafe.

We can only do so by changing our culture to ensure we are not all bystanders.

That we don’t just look the other way but call out inappropriate behaviour when we see it, everywhere we see it.

The workplace, the dressing room, the pub, the golf club and the WhatsApp group.

We also have to face up to and tackle the appalling effect easy access to pornography is having on our boys. Pornography is not new but it has become more accessible and even more violent.

We must intervene early to teach our sons appropriate lessons from primary school up on healthy relationships, gender equality and consent.

We in government will help lead those conversations to bring about a better understanding among men. My Department will soon launch a national campaign on consent.

I know so many men have been thinking deeply about this.

We cannot do this without you. We need you to stand with us. We can make this change and make this moment count.

I know that for victims, coming forward to report what is happening to you is the hardest decision to make.

There is a responsibility on all of us, as a State, to protect you when you do look for our help.

By ensuring there is a refuge space for anyone who needs one.

By supporting more women to live safely in your home if that is your choice.

By reassuring victims they will be treated with dignity and respect by the criminal justice system.

Through Supporting A Victim’s Journey, my plan to help victims and vulnerable witnesses in sexual violence cases, we are making progress.

And while this is not simply a criminal justice issue, as Minister for Justice I want to be clear.

I will do whatever it takes to ensure that perpetrators are investigated, prosecuted and face the full rigours of the law.

That the punishment matches the crime. And that our Gardai have sufficient resources and technology and that our laws are strong enough to bring abusers to justice.

I would like to acknowledge at this point the dedicated work of An Garda Siochana in their investigation into Ashling’s murder.

I know they are determined to bring the killer to justice, as they are in every case.

This year, I will be introducing legislation to strengthen the law in a number of areas.

The new Garda Powers Bill will provide a clear and transparent statutory basis for the existing police powers of search, arrest and detention.

Before Easter, I will publish a Bill which will include new criminal offences for stalking and for non-fatal strangulation.

The act of stalking itself is already covered by existing law, but I will propose the following changes to make the law clearer and stronger:

- Make it clear that stalking includes watching or following a victim, even where they are not aware of being watched or followed.

- Make it clear that impersonating the victim, and then communicating with a third party, is illegal

I will also consider introducing a provision to allow a victim, in very serious cases, apply to the court for an order to prevent the alleged perpetrator from communicating with them in advance of a trial.

I particularly want to thank Eve McDowell and Una Ring who have campaigned tirelessly for this, and Senator Lisa Chambers who has worked hard on this issue in the Seanad.

While choking and strangling are already illegal, creating a new, standalone offence should encourage victims to come forward and report what has happened to them.

It has been shown that this crime can be an indication of future, lethal violence and is a risk factor for homicides against women in the home.

In the Summer, I will publish a new Hate Crime Bill which will introduce new, specific aggravated offences with enhanced penalties for crimes motivated by prejudice against certain characteristics, including gender.

Before the end of September, I will publish a new Sexual Offences Bill, which will introduce important changes including:

I will also seek to enact the Sex Offenders Bill within months to strengthen the management and monitoring of sex offenders in the community.

Within weeks, I will sign an order to bring into operation legislation which provides for pre-trial hearings, which will significantly improve the trial process for victims of sexual offences.

And I will take further measures if needed.

I accept what those working on the frontline have told us: the services we provide as a government and as a State are too diffuse and need to be streamlined.

Victims should have easy and understandable access to the supports they need.

I am now taking action to make change.

Following consultation with the Minister for Children, it is intended that the responsibility for policy and service provision for domestic, sexual and gender based violence will be combined under the Minister for Justice.

Work is underway on how this will be structured and I will announce further details in the coming weeks.

I would like to take a moment to thank the dedicated TUSLA staff who have, and continue to, focus on supporting this area.

There will be oversight from the Department of the Taoiseach to ensure all Departments deliver.

I cannot say that no woman will suffer at the hands of a man tonight.

None of us can.

What we can do is commit to Ashling, to so many other women, and to each other that we will dedicate ourselves to the long and difficult path of change.

We know pain and anger only too well.

But let all of us hold on to the determination and solidarity of this week, and join together in a common cause.

That we come together to demand zero tolerance of violence and abuse against women."