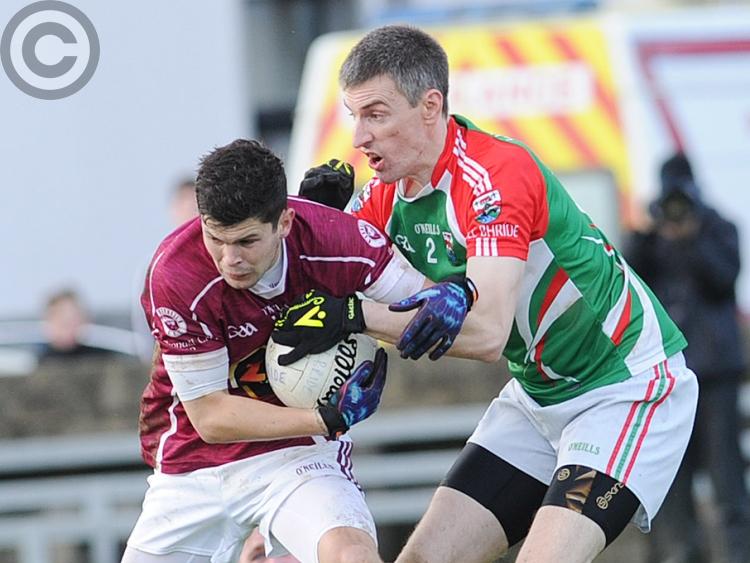 TEN PLAYERS saw red at the Grove this afternoon as O'Connell's progressed to the second round of the Leinster Intermediate Football Championship with victory over Carlow champions Kilbride.

Referee Noel McKenna from Kildare also ordered two Maor Uisce off the touchline, bringing the number of people he dismissed to 12, which must be something of a record.

O'Connells' Paul McKeever was the first to get the line before his attacking colleague Robert Quigley was dismissed on a second yellow card before half-time. This left Paddy Bates' side facing the second-half with just 13 players.

However, the numbers were soon evened up when Seán Foley (second yellow) and Pauric Nolan were sent-off in successive minutes.

The match descended into a farce thereafter with six further players being ordered off by the whistler. O'Connells' Jason Carroll was red carded following a second yellow, while Davy Moran of Kilbride received his marching orders after a scuffle.

James Foley was sent off with time near up for a second yellow, reducing the Barrowsiders to 11 players.

This wasn't to be the end of it though as, while Foley was being reprimanded, Seán Connolly (O'Connell's) and Michael O'Brien (Kilbride) got into a row across the pitch - resulting in both receiving red cards.

And to round it all off, Kilbride defender Mark Curry became the 10th man sent to the line on a second yellow card.

O'Connell's finished with 11 players, while the visitors were left with just the nine.

The result seems inconsequential after all of that. But just in case you're interested, O'Connell's prevailed 2-10 to 1-8.