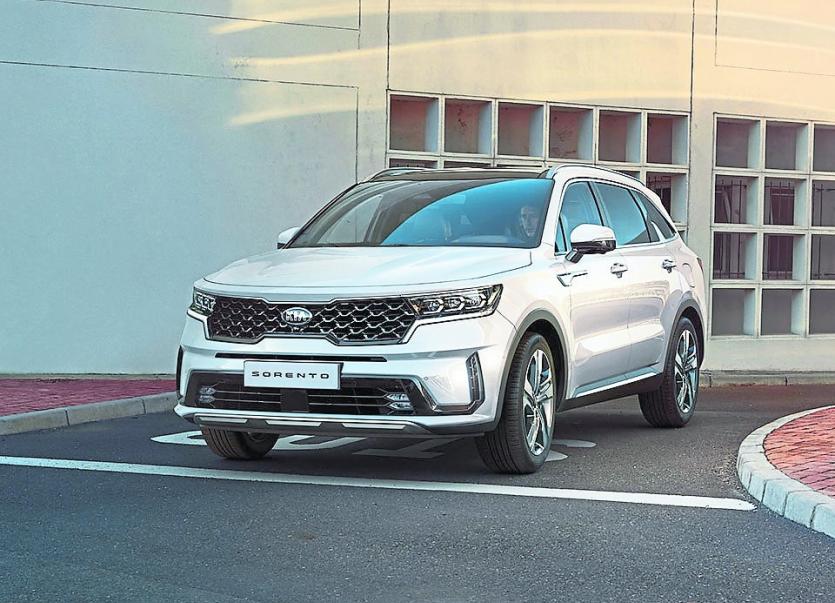 At the end of last 2020 I reviewed the all new Kia Sorento diesel.
Now their plug in hybrid joins the range and I have been testing it.
The new Sorento range is currently available as a 7 seat model in two wheel drive and with a 2.2 litre diesel engine and now the plug in hybrid with all wheel drive and a 1.6 litre petrol.
Kia claim a range of up to 57 Km on one charge or possibly up to 70km in city driving. So lets see?
There are two trim levels K3 and K4 as on test here. Prices start at €50,000 for the K3 PHEV version.

So has it any street cred?

The new Kia Sorento hybrid is a very good looking well proportioned SUV.
I really like the style which is both distinctive and bold in a classy sort of way. Kia have in my opinion one of the best looking SUVs around.

The new car really does feel top quality with high-grade materials and trim in evidence throughout the car.
The K4 model tested is the top of the range and is really very well equipped.
Highlights include, digital instruments which can be changed in style and incorporate a blindspot camera which is activated when you use the indicators.
Other nice touches are the panoramic glass roof, heated seats in both the front and the rear, USB ports positioned on the sides of the front seats, climate control switches in the rear for the third seat row, ambient lighting, two-tone leather upholstery, a 10.25 inch touchscreen, Bluetooth, Apple car play, Android Auto, power tailgate, 360 degree around view monitor, Bose sound system and so on. Suffice to say its superbly kitted out!
Needless to say with the last two rear seats in place there is less useful luggage space, (though more than in the previous model) but those seats are handy for the school run and fold or raise very easily.
Access to the 3rd row is easy too with the press of a button on the second row the last row quickly slides forward. The kids will love it!

What is under the bonnet?

A 1.6 litre petrol engine which on its own produces 180PS and an electric motor producing 67 KW giving a combined power output of 265 PS.
Drive is sent to the front wheels or all four wheels via a 6-speed automatic.
Great praise must go to Kia for the packaging of the battery as it does not intrude in any way on cabin or luggage space as in so many other PHEV’s.
Realistically I regularly got about 50KM from a single charge.
This again highlights for me the Achilles heel of any PHEV. You really must be disciplined about plugging in each and every time, and frankly you don’t!
It's too much hassle sometimes to find a charger, or an unoccupied one at that. Added to which somewhat oddly the government have cut the SEAI grants in half just at a time when they want to encourage the use of such vehicles. Bizarre thinking!!
PHEV’s are a stopgap solution in my opinion.

The new Sorento rides and handles very well I found it to be a truly refined motorway cruiser with wind, road and engine noise all very well suppressed while exuding an air of luxury and quality I had not felt in the previous model.

I'ts big, it looks great has bags of room inside, has superb build quality, comes very well equipped as standard, and boasts a full 7 year warranty.
For my money I’d buy the superb Sorento diesel version as PHEV’s don’t offer range for the work involved in constantly charging them.