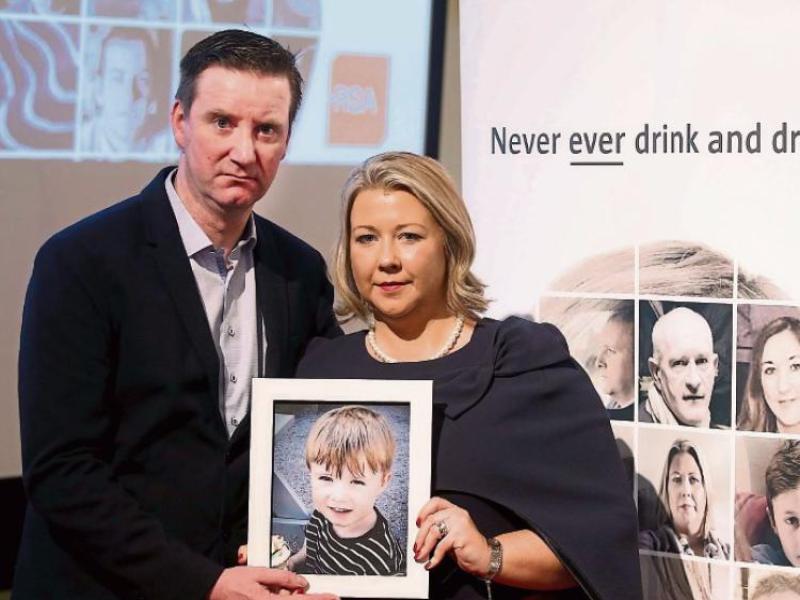 Portarlington mother Gillian Treacy who is at the forefront of a Road Safety Authority campaign to stop drink driving, has today been appointed to its board of directors.

She is thrilled to have been appointed to the board, and ready to take on the big working challenges of the three year post.

"I am thrilled, it is a great legacy for Ciarán. I can bring a human approach to the RSA, we can put in our own personal experience. You could talk facts and figures all day but we know what it is like to be on the other side," she said.

Ms Treacy's car was hit by a drunk driver in Portarlington in 2014, a horrific collision that claimed the life of her three year old son Ciarán, and left her with catastrophic injuries.

Finbarr O'Rourke from Portlaoise is serving a prison sentence of eight years with two suspended, for dangerous driving causing the death of Ciarán.

Last Christmas Gillian bravely became the face of a heartrending multi media campaign by the RSA, together with her husband Ronan, and Laois emergency and medical staff. The television campaign showed a video of Ciarán, and recalled that horrific day and the trauma that followed.

This year when the campaign was again rolled out, Ms Treacy admits it was difficult to watch.

"It came on first this year when I was in the kitchen and the kids were in bed. For a second I thought, that poor woman, then I stood looking at it thinking 'that is me, and Ronan, and Ciarán. It hit me big time. I don't feel sorry we did the campaign. It was a huge decision to open up our personal lives, but if it is bringing road deaths down, and they were the lowest on record this year, then I stand by it," she said.

The Minister for Transport, Tourism and Sport, Shane Ross announced the appointments today of Ms Treacy ,as well as Ms Donna Price, as two new directors are in the area of Road Safety Advocacy.

“I am delighted that our new Board members are active in the area of Road Safety Advocacy. Their bravery in the face of personal tragedy has already inspired others and made many aware of the significant dangers on our roads. Their passion and their personal experiences will drive the board to take further measures in pursuit of saving lives," he said.

His department has also today published a mid-term evaluation report, undertaken by the RSA, of the Government’s Road Safety Strategy 2013–2020, with a review of the strategy targets and actions.

It assesses Ireland’s performance in aiming to reduce fatalities to 124 or fewer and serious injuries to 330 or fewer by 2020.

2017 was the safest year on Ireland’s roads since road deaths were first recorded in 1959, with 158 deaths recorded. To date this year, 2 persons have been killed on Irish roads, a decrease of 1 when compared to the same period last year.