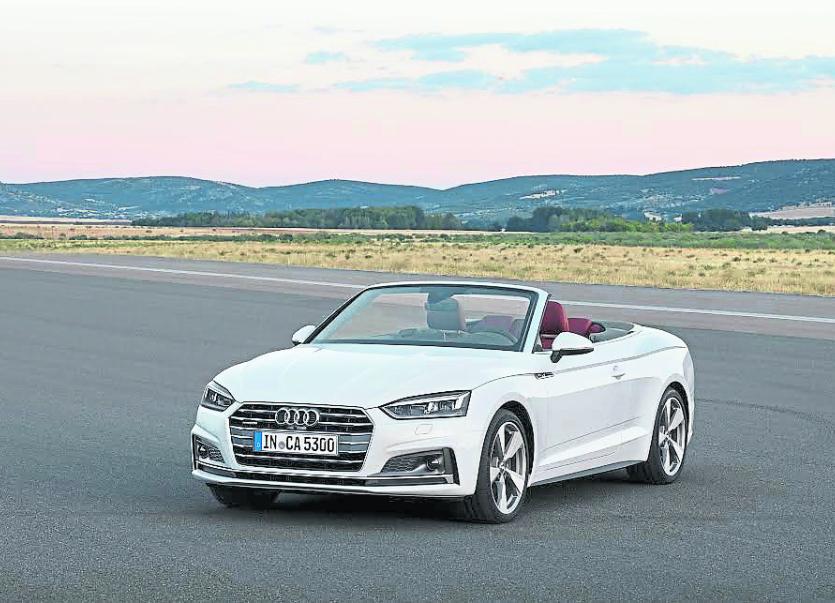 The innovative Audi A5 and S5 Cabriolet, which will arrive on Irish shores in Q1 2017, will complete the new generation of the A5 family.

With room for four people and a fully automatic soft top, the redesigned model is kitted out with the latest technology, including driver assistance systems and seat belt microphones.

The new Audi A5 Cabriolet is characterised by sleek lines and a flatter, sportier look, including a wider three-dimensional Singleframe grille and wave-shaped shoulder line.
The soft top fits perfectly and delivers outstanding aeroacoustics thanks to effective insulation.
The new one-touch opening function makes operating the standard acoustic hood much easier: the top fully opens in 15 seconds and closes in 18 seconds, even while driving up to 50 km/h.
LED rear lights and optional LED or Matrix LED headlights with dynamic turn signals at the front and rear make high-end technology visible even after dark.

Lighter but stronger: the body

The body of the new Audi A5 Cabriolet is the strongest in its class and yet is among the lightest in the segment.
Thanks to a smart mix of materials and lightweight design, compared to its predecessor model, engineers have increased the car’s torsional rigidity by another 40 percent and reduced its weight by up to 40 kilograms, making the Cabriolet even more agile.
The Cabriolet’s additional body struts and reinforced sills make up for the absence of a fixed roof.
In the event of a crash and rollover, head and torso airbags and automatically extending aluminium profiles ensure the occupants’ safety.

An initial choice of two engines for the new Audi A5 Cabriolet has been announced: a 2.0 TDI with 190 hp and a 3.0 TDI with 218 hp. It is thought that a 2.0 TFSI with 190 hp and a 3.0 TDI with 286 hp may also join the line-up after market introduction.
Compared with the previous model, the engines offer up to 17 percent more power while consuming as much as 22 percent less fuel. All engines combine high efficiency with sporty power and smooth running – especially the two 3.0 TDI six-cylinder engines.
The Audi S5 Cabriolet is moving into a whole new league with its newly developed 3.0 TFSI.
The boosted six-cylinder engine produces 354 hp of power – 21 hp more than its predecessor.
The top model accelerates from 0 to 100 km/h in 5.1 seconds, and on up to an electronically governed top speed of 250 km/h.
It features quattro® permanent all-wheel drive and the eight-speed tiptronic as standard.
Six-speed manual transmission, seven-speed S tronic dual-clutch transmission or eight-speed tiptronic – tailor-made drivetrain technology is available for every engine option.
With front wheel drive as standard, drivers will also have quattro® drive with ultra technology and permanent all-wheel drive as an option. The latter comes as standard for the 3.0 TDI with 286 hp.

Spacious and functional: the interior

The increased dimensions, the wheelbase extended by 14 millimetres and more compact seats, increase the space for the driver and passengers.
As an option the ambient lighting with thirty adjustable colours creates a fitting mood for the interior.
With the hood closed, the luggage compartment has a capacity of 380 litres.
As standard, the bootlid on the A5 Cabriolet now opens automatically using the remote control key or the button in the driver’s door. Gesture control for the bootlid is also available as an option: A proximity sensor in the bumper responds to a kicking movement with the foot and the bootlid will open automatically once the optional convenience key is detected.

Thanks to the all-new operating and display concept including natural language voice control and free-text search, the driver can control all functions effortlessly and intuitively.
Standard seat belt microphones for driver and front passenger improve voice quality even with the hood open.
As an alternative to the analogue instrument dials, the large, high-resolution TFT monitor of the Audi virtual cockpit, measuring 12.3 inches, presents richly detailed graphics.
The optional head-up display projects all relevant information onto the windshield in the driver’s direct field of vision as easily comprehensible symbols and digits, enabling the driver to keep their eyes on the road.

MMI navigation plus with MMI touch tops the infotainment range. The high-end system features an 8.3-inch monitor, DVD drive, 10 GB flash memory and a USB connection with charging function.
An LTE module provides access to Audi connect online services – free of charge for three years. The media hub also comes with a Wi-Fi hotspot which connects passengers’ mobile devices to the internet.
The Audi smartphone interface integrates iOS and Android devices, with the Audi phone box connecting smartphones to the on-board antenna in order to provide superior reception quality. It also charges the smartphone inductively, without any wires.
The Bang & Olufsen Sound System features innovative 3D sound. It opens up the spatial dimension of height and gives the driver the sense of sitting in a concert hall.

The new Audi A5 Cabriolet offers up to thirty ground-breaking driver assistance systems, enhancing safety, comfort and efficiency.
The adaptive cruise control (ACC) ‘Stop&Go’ system including traffic jam assist relieves drivers in slow-moving traffic up to speeds of 65 km/h by assuming the tasks of braking and accelerating the car, and also temporarily takes charge of steering on better roads.
The predictive efficiency assistant evaluates GPS information from the car’s immediate surroundings and helps to save fuel by giving specific driving advice – a unique feature in this segment.
Collision avoidance assist intervenes in a fraction of the second if the car needs to drive around an obstacle to avoid an accident.
The line-up is rounded out by other assistance systems such as turn assist, park assist, rear cross traffic assist, exit warning, camera-based recognition of traffic signs, Audi active lane assist and Audi side assist.

The new Audi A5 and S5 Cabriolet will arrive in Irish dealerships in March 2017. Pricing will be announced in Q4 2016, with the S5 Cabriolet to follow.
The Audi Group, with its brands Audi, Ducati and Lamborghini, is one of the most successful manufacturers of automobiles and motorcycles in the premium segment.
It is present in more than 100 markets worldwide and produces at 16 locations in twelve countries. 100‑percent subsidiaries of AUDI AG include quattro GmbH (Neckarsulm), Automobili Lamborghini S.p.A. (Sant’Agata Bolognese, Italy) and Ducati Motor Holding S.p.A. (Bologna, Italy).
In 2015, the Audi Group delivered to customers approximately 1.8 million automobiles of the Audi brand, 3,245 sports cars of the Lamborghini brand and about 54,800 motorcycles of the Ducati brand.
In the 2015 financial year, AUDI AG achieved total revenue of €58.4 billion and an operating profit of €4.8 billion. At present, approximately 85,000 people work for the company all over the world, about 60,000 of them in Germany.
Audi focuses on new products and sustainable technologies for the future of mobility.