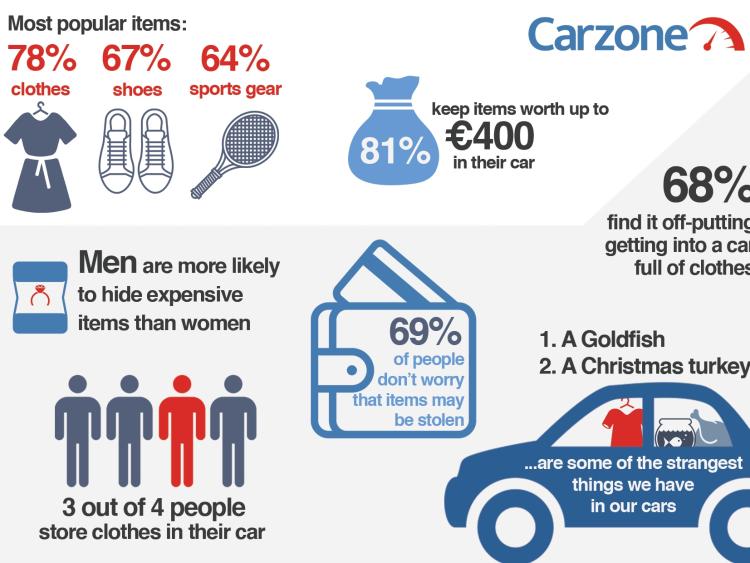 Clothes are the most popular item to keep in the car (78%) followed closely by shoes (67%) and sports gear (64%).  A surprising 1 in 4 admit to storing their laptop in their car while a quarter keep beauty products or toiletries in their vehicle.

According to the Carzone poll, convenience is the main reason we keep items in our car (74%) while over 1 in 5 (22%) say they are too lazy to unpack their car on a regular basis. Over a third (37%) say they have used their car to hide expensive purchases from their partner but it would seem men are more likely to hide expensive items than women (43% men vs 28% women).

A significant 81% say they keep items up to the value of €400 in their car but almost half (48%) admit to being unsure whether their insurance policy would cover these items in the advent of a theft. However, just over two thirds (69%) say they are not worried about having items stolen.

While a large portion of us are using our cars as an extension of our home, 68% say they do find it off-putting getting into a car littered with clothes and gym gear.

Carzone also asked people what was the strangest thing they have ever kept in their car. A goldfish, a bale of hay, a concert sized xylophone, a cast iron cauldron and a Christmas turkey are just some of the weird and wonderful things we have kept in our cars. One respondent also said their fiancé stored her engagement ring under the car seat while he mustered up the courage to propose!

Commenting on the findings, Ailish Tully, brand manager, Carzone said: “It’s clear from the findings that the cardrobe is here to stay with many of us using our car as a second home. While it may be a handy place to keep items, we would urge people to consider the value of what is being stored in their car.

Many insurance policies do not cover items stored in your car such as a phone, laptop or handbag and with the average person keeping up to €400 worth of items in their car, these items could be costly to replace. Our advice is to keep valuable possessions out of plain sight in your vehicle and to always check your insurance policy so you know what it covers.”

* 73% admit to using their car for storage
* Clothes are the most popular item to keep in the car (78%) followed by shoes and sports gear
* 3 in 4 (74%) say their car is a convenient storage facility
* Men are more likely to hide expensive items in their car than women
* 69% say they don’t worry that items in their car will be stolen
* 48% admit being unsure if their insurance policy covers items left in their car
* 81% keep items to the value of up to €400 in their vehicle
* Over two thirds (68%) say they find it off-putting getting into a car full of clothes and/or gym gear
* A bale of hay, a concert sized xylophone, a turkey for Christmas, a cast iron cauldron and a goldfish are some of the strangest thing we have stored in our cars
* Almost 3 in 4 Irish people use their car for storage and you’re likely to find everything from shoes to toiletries in there. That’s according to a new survey by car buying experts Carzone. The survey of 528 Irish adults reveals the rise of the ‘cardrobe’ whereby more and more Irish people are using their car as a second wardrobe.