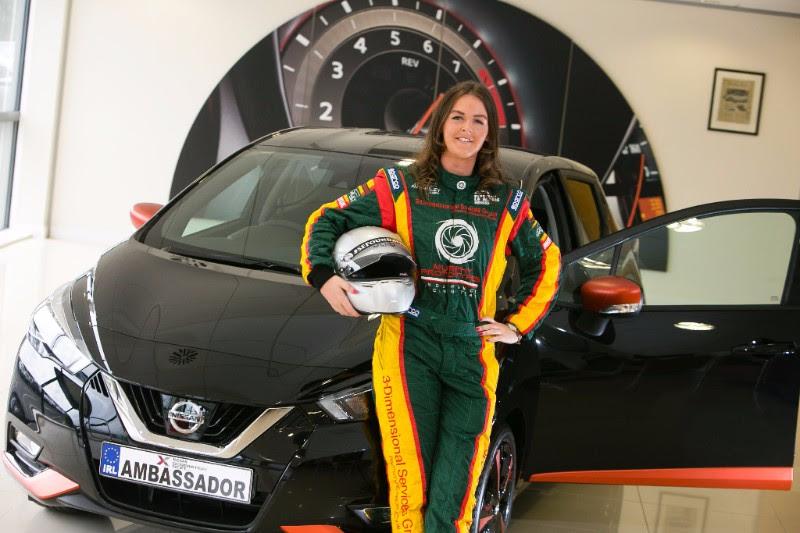 Nicole Drought is a Nissan Next Generation Ambassador.

Twenty three year old former Tipp camogie player has just completed a four years Bachelor of Business Degree and is ready now for racing in the UK and Ireland.

Tipperary Racing Driver Nicole Drought has been named by Nissan Ireland as a finalist for their Generation Next initiative.

From a list of over 400 applicants, the Sportswoman.ie Irish Sportswoman of the Year now joins a short list with 18 other candidates, 10 of whom will become Generation Next Ambassadors and receive the use of a Nissan for the next twelve months.

Nicole has just turned 23 and recently completed a four year Batchelor of Business degree, majoring in Accountancy and Finance at the University of Limerick. In 2017 she will compete in two race series, both in Ireland and in the UK.
Voting opened today and remains open for three weeks- to vote for Nicole, simply click HERE.

Nicole Drought: "I'm delighted to have reached the final 18 candidates. Having met some of the others during the week, I know it won't be easy but I am counting on the votes from my supporters and hopefully will make the final 10. I would love the use of a Nissan and I will have plenty of travelling to do in 2017, with my campaign being split between Ireland and the UK."

Nicole Drought, is a native of Roscrea in Tipperary. A former All Ireland winning Camogie Captain, she made her motor racing debut in 2015, driving a 250bhp Honda Integra in the Irish Touring Car Championship. In 2016, she became the first Irish Ambassador for the Sean Edwards Foundation and accepted their invitation to travel to Le Castellet in France to test a GT3 Porsche 911. Also in 2016, she became a member of the Murphy Prototypes Young Driver programme and attended an ELMS race in France with the Irish based European sportscar team. In December 2016, Nicole was voted sportswomen.ie Irish Sportswoman of The Year, taking a massive 20% of the public vote- the first for a racing driver against far higher profile sports.
In 2017 she will race in the New Millennium series in the UK and has just been named as a Nissan Generation Next finalist.

Nissan is seeking ambitious people who could use a free car or van to achieve their dreams of becoming Ireland’s next generation of leaders on the local, national and international stage.

Ten people who exemplify the drive to succeed in their chosen field will be given a brand new, taxed and insured Nissan to drive for a year as part of the innovative Nissan Generation Next ambassador programme.

Applicant’s chosen fields can include anything from creating a new business to having a chart-hitting single, from pioneering scientific research to competing at the top level of sport.

The Nissan Generation Next programme is designed to support ambitious Irish people, from whatever walk of life, who have the drive and determination to become tomorrow’s leaders.