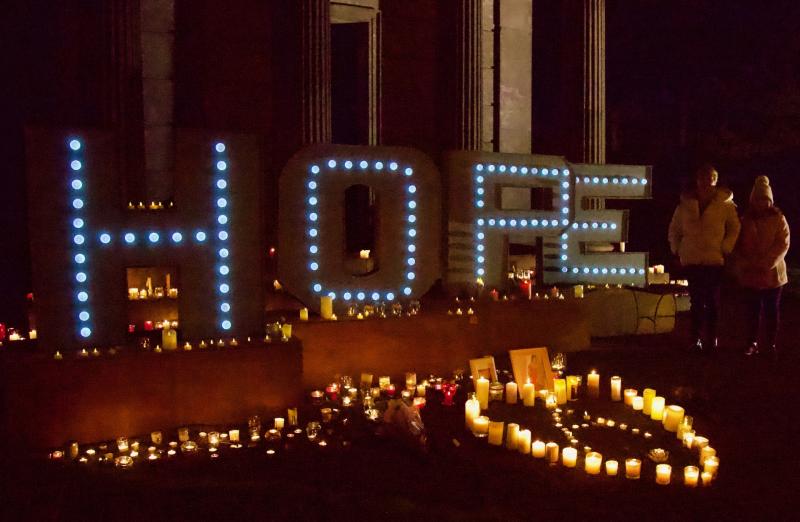 HUNDREDS of people gathered at John's Hall in Birr on Sunday night for a vigil in memory of Aisling Murphy, who was so cruelly murdered along the Grand Canal bank in Tullamore on Wednesday last.

It was the second vigil held in the town over the weekend as Birr GAA Club and Birr Camogie Club had also organised one at St Brendan's Park on Friday evening.

On Sunday evening the Hope sign, which has become a familiar sight as part of Birr's Christmas lights and decoration programme, was placed on the steps of John's Hall and became the focal point of the commemoration. Hundreds of candles, brought along by people attending the vigil, were placed around and on the sign, many of them still lighting there on Monday morning.

The candles effectively provided a light of hope in what has been a very dark few days in the county.

A group of singers provided some music, including 'Amazing Grace' and concluding with 'The Parting Glass'. Birr parish priest Very Rev. Tom Hogan spoke briefly to the assembled gathering and remembered Ashling, reciting a poem someone had written in memory of Ashling entitled "She went for a run".

Under a clear sky with an almost full moon shining, the reverent silence from the crowd reflected how deeply this tragedy had affected everyone. There has been a sombre mood since news broke of the tragic death of Ashling and people were anxious to demonstrate in some form their support for the Murphy family and to express their sadness at the events which unfolded in Tullamore last week.

The crowd was representative of all sectors, men and women, young and old, children and adults, many clutching candles to remember a talented young girl who had touched so many people. It was a community coming together in a show of solidarity with so many other communities across the country over the weekend, angry at what had happened and determined to show that enough is enough and something like this should never be allowed to happen again.

It was a touching and poignant event and as people slowly drifted away afterwards, many after offering a silent prayer for Ashling and her family as they stood in front of the Hope sign and looked at all the candles lighting around her photograph, there was the sense that there is hope for the future and that society will take notice and take steps to change attitudes so that women can be protected and can be safe when they go for a run.