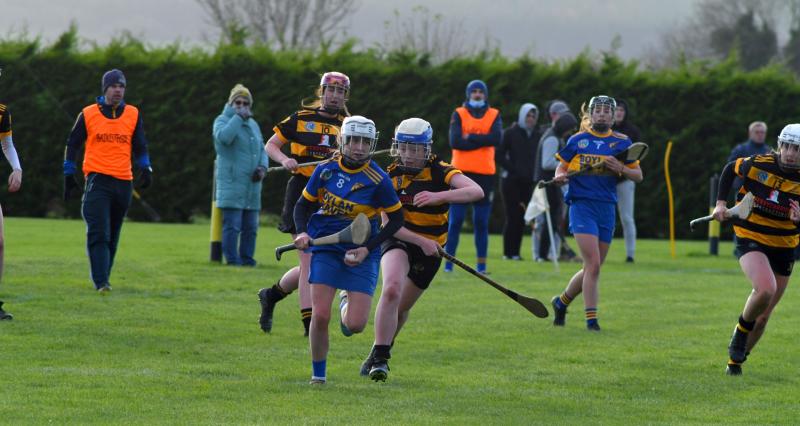 St Rynagh's won the Leinster title for the third time in a row.

DESPITE conceding an early goal, it was a powerful display from St Rynagh’s that saw them claim the 2020 AIB Leinster Intermediate Club Camogie Championship title, with eight points to spare over a dogged Celbridge outfit in Clane on Saturday last.
An early goal from Holly Tynan inside the opening minute gave Celbridge a dream start but they were unable to sustain the pressure, St Rynagh’s soon hit back with a Sinead Flannery point on nine minutes before Mairead Daly struck for goal with the last strike before the opening half water break. Seizing the lead, St Rynagh’s ensured that they would not relinquish it for the remainder of the tie.
A second point from Flannery looked to edge the travelling side further ahead but this was a score that drew a breath of relief from Celbridge. As Emer Reilly was forced to foul Flannery after loose play between herself and Sarah Kelly. The centre back and her side were relieved that the mistake would only result in a point.
Susie O’Carroll forced her way forward and winning a free she quickly converted before St Rynagh’s again seized control. Three points before the break sent them left them four points to the good except for the efforts of O’Carroll whose second before the break left three between the sides.
On the restart again St Rynagh’s looked to exert their dominance and a series of exchanged points did little to help Celbridge bridge the gap between the sides as the clock ticked ever closer to full time.
With the energy of the Celbridge side quickly wearing thin it was a solid strike on the 44 minute that looked to seal the tie and the title for the Offaly side.
After a long run from Kate Kenny, she found herself one-on-one with Kelly. Kenny’s strike was crisp and sailed to the left of Kelly and into the back of the town end net. A further point from Kenny before one from Louise Mannion sealed matters as St Rynagh’s march on as AIB Leinster Intermediate Camogie Club Champions.
They will play the All-Ireland semi-final on Sunday next December 19th at 1pm against Eglish from Tyrone at Templeport St Aidan's GAA grounds in County Cavan.
Scorers:
St Rynagh’s: Siobhan Flannery (0-4, 0-2 frees, 0-1 pen); Kate Kenny (1-1); Mairead Daly (1-0); Sinead Hanamy (0-2); Kate O’Connell (0-1), Louise Mannion (0-1).
Celbridge: Holly Tynan (1-0); Susie O’Carroll (0-3, 0-1 free, 0-1 '45'); Gillian Keegan (0-1).
ST RYNAGH'S: Ellen Gilligan; Sinead Moran, Elaine Sullivan, Meadbh Dooley; Emma Corcoran, Grainne Dolan, Kate O’Connell; Helen Dolan, Roisin Egan; Linda Sullivan, Sinead Hanamy, Mairead Daly; Louise Mannion, Kate Kenny, Siobhan Flannery. Subs: Ciara O’Connell (for Moran, 63 mins); Heather Moran (for Hanamy, 63 mins).
CELBRIDGE: Sarah Kelly; Laoise Mimnagh, Laura Murtagh, Claire O’Sullivan; Niamh Egan, Emer Reilly, Emma Barry; Chanice Corcoran, Grace Carragher; Hannah McDonnell, Holly Tynan, Annie Courtney; Niamh Mortell, Susie O’Carroll, Gillian Keegan. Subs: Meave O’Donovan (for Murtagh, 30 mins).