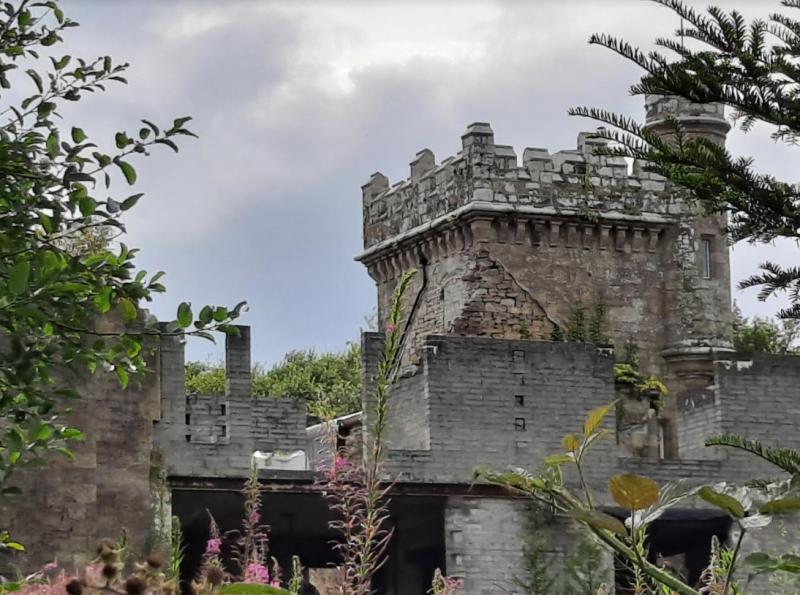 The front of Brittas House, Clonaslee, as it exists today. It was planned to rebuild a substantial part of the house but the work has stalled since the mid noughties.

Destroyed by a fire in 1942, Brittas House near Clonaslee was a fine castellated house. It was built in 1869 by General Francis Plunkett Dunne to the design of architect John McCurdy and stands near the ancestral home of the O’Dunnes.

The gate piers of the grand house still remain on the western edge of The Green. The walls and windows give an idea of the house’s architecture. It was three storeys high.

On the wall over the main entrance, the family crest is still visible; it shows an eagle and a drawn sword. The last of the family to reside in Brittas House were two old ladies, daughters of Francis Plunkett Dunne. The house had extensive gardens, shrubberies and out-offices.

The links with Clonaslee village and the remains of the Brittas Estate are strong. The expansive demesne grounds contain many splendid trees, including remnants of the larger plantation's Lawson’s cypress, copper beech, yew, sycamore, cut-leaved beech, and oak that covered much of the townland of Brittas over a century ago. Brittas Lake – which was renovated in 2000, was originally constructed as a reservoir for the House. It's now a popular public amenity area.

Recently the 19th Century world of Brittas House and Estate has been brought vividly to life because of the publication, in March, of a novel which is a partly fictionalised account of the real-life people who once lived and worked here.

The novel is called “The Dunnes of Brittas” and has been written by Kevin Akers. Kevin is an American who lives in the city of Petaluma (which has a population of about 60,000) in northern California. Kevin works as a Graphic Designer.

Kevin told the Midland Tribune that when he first began reading his great-grand-aunt Lucinda Rogers’ nearly 100-year-old letters to family back in Ireland, he was struck by the strong thought that this was a great story which should be written down.

“I said this to my wife Judee,” Kevin recalls, “and she suggested that I write it.”

Kevin launched enthusiastically into the task and has produced a novel which is almost four hundred pages long, and is very well written and engrossing.

He begins many of the chapters with sections of the letters written by his great-grand-aunt Lucinda (who lived in Petaluma) to her niece and daughter telling them about life on the Brittas Estate.

Kevin is aware of what makes for engrossing fiction as he tells his tale of the lives of his ancestors. Leaning partly on the correspondence for inspiration, he weaves a sweeping, century-long tale which follows two intertwined families, the Dunnes and the Lawlers, as they emigrate from an Ireland going through the hell of the 1840s and build new lives in San Francisco and Petaluma.

“The whole outline of the novel was in those letters,” Kevin said.

Lucinda Rogers was born in San Francisco in 1857, and grew up on a ranch near Petaluma. Her parents, Patrick and Bridget Lawler, had emigrated from Ireland in the 1840s.

They left behind them an Ireland snared in the horror of the Great Famine, during which a million people starved to death, and two million fled the country.

Laois was badly hit during the Famine. There were reports of children regularly eating grass to survive. Brittas was one of the oldest and largest estates in Laois (or Queen’s County as it was then known). It was owned by General Edward Dunne (who was born in 1763). The ancient Dunne family had ruled there since at least the 1650s. It was claimed that the clan could trace their lineage back to Cathair Mór, a High King of Ireland who died in 123AD.

The estate manager of Brittas was General Edward Dunne’s cousin Peter Dunne. In the story, Peter's son James is the first of the family to emigrate. The reason given in the novel for James deciding to emigrate is because he was so disgusted by his father's, Peter's, behaviour, his father's corruption. Peter is collecting rent but a tenant can't pay him.

The tenant and Peter come to an agreement. In lieu of rent the tenant's 16 year old daughter will prostitute herself, offering her body to James. James does not accept the offer and leaves the rundown cottage in disgust. Soon after he leaves the country.

I was interested in this concept of tenants prostituting their daughters and wives to landlords and estate agents in lieu of rent. I looked into the matter but could find nothing about it. It's very possible that it was a fairly common practice. (The novel also mentions the sexually lax behaviour common during Wakes, a subject I knew nothing about.

This behaviour included a teenage dating game called the Ring, a version of Spin the Bottle, which would be played in the same room as the deceased. The ancient Greeks practised a similar game, also in the presence of the deceased, which is mentioned in the Iliad).

James ends up in New Orleans where he is confronted by the horrors of slavery, where slave owners can get away with abuse of their charges without any consequences.

James falls in love with a southern belle. He is joined by his brother Peter. They move to San Francisco.

A few years later, James and Peter's sister Bridget — mother of Lucinda Rogers — emigrated with her husband, Patrick Lawler, first to San Francisco, then later, after Lawler had succeeded in business, to a 2,000-acre ranch east of Petaluma on Sonoma Mountain. Lawler purchased the ranch from Vallejo, the well-known military commander, politician and rancher.

As well as the letters from Lucinda, Kevin begins some of the chapters with excerpts from either fictionalized letters or nonfiction documents such as articles from the Argus-Courier, a newspaper based in Petaluma, which was founded in 1859.

As it follows the fortunes of the Dunnes and the Lawlers, the novel provides a compelling portrait of life in Laois and in Clonaslee, and during the early years of San Francisco and Petaluma. The novel vividly brings the incidents and the people of those times to life. For example, when news arrives that President Lincoln had been assassinated, Bridget in Petaluma writes her brother Michael in Ireland, “All the townsfolk gathered at our plaza in front of the Baptist Church where the procession included a riderless horse, a hearse, the Petaluma Guards and a brass band that puffed out a sad mournful dirge. The choir was much better. That Baptist preacher breathed down fire and brimstone like I have never heard. Very many of those who listened had been bitter, implacable enemies of Mr. Lincoln just a few short days before but managed to shed tears on his behalf this morning.”

When Bridget and 4-year-old Lucy go to early mass at St. Vincent’s in Petaluma, described as “An American facsimile of a Gothic chapel roughly rendered in redwood,” we get a glimpse into Petaluma’s immigrant roots: “She did a bit of socializing with her fellow parishioners; a few of them Irish women but mostly Swiss, Italian and Portuguese immigrants, wives of dairy farmers.”

As the story delves into a historically accurate account of a family dispute over a will, Kevin begins one chapter with a quote from the Petaluma Weekly Argus of October 29, 1889: “The controversy among the heirs over the will of the late capitalist Patrick Lawler of Sonoma Mountain has been amicably settled.” The Argus newspaper was invaluable for Kevin’s research, and he found many articles on the Lawlers in the newspaper's archives.

It took four years of research (including visits to Ireland, England and New Orleans) and many early-morning writing sessions to complete the novel. It also took a strong will. Kevin pitched the project to an estimated 150 publishers, all of whom rejected it, insisting readers don’t read historical novels anymore, especially about one’s own family.

“The Dunnes of Brittas” can be ordered through Copperfield’s Books. It is also available through Amazon in hardcover, softcover and Kindle versions.