What is the Met Eireann weather forecast for Ireland for the weekend? 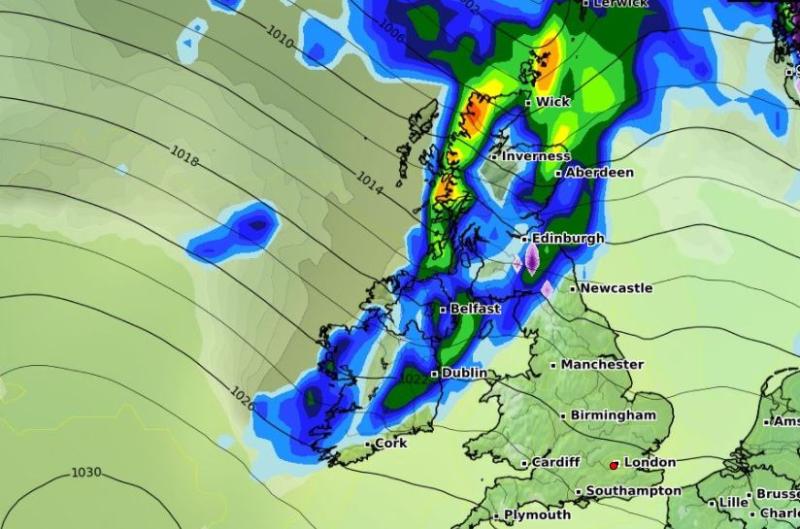 A band of rain is set to cross Ireland on Sunday. PIC WX Charts

According to the latest Met Eireann weather forecast for Ireland for the weekend, there will be some showers on Saturday with more prolonged rain on Sunday with temperatures only reaching a high of 11 degrees on both days.

Temperatures are set to drop below freezing again on Saturday night but temperatures will improve after the weekend with some rain or drizzle expected in the early days of next week.

According to the latest Met Eireann weather forecast for Ireland, Saturday will bring a mix of showers and sunny spells. Showers will be most frequent during the morning and early afternoon, with drier and sunnier weather spreading from the north later in the day. Highest temperatures of 7 to 11 degrees in a light to moderate northerly breeze.

According to Met Eireann, there will be some brightness early on Sunday, turning cloudy or overcast ahead of rain which will move in from the northwest through the afternoon. The rain may be heavy in the northwest. Southern counties will likely stay dry until later in the evening. Highest temperatures of 9 to 11 degrees. Light northwest winds will back southwest and freshen with the rain.

Sunday night will be a cloudy night with outbreaks of rain and drizzle, rain heaviest and most persistent in northern and northwestern counties. Not as cold as recent nights, with lowest temperatures of 6 to 8 degrees. Moderate westerly winds.

According to Met Eireann, Monday will be dull day with scattered falls of drizzle, wettest in the north and northwest with more persistent falls of rain there. Highest temperatures of 10 to 13 degrees and breezier with moderate to fresh westerly winds. Mild and cloudy overnight with outbreaks of rain and drizzle. Lowest temperatures of 7 to 9 degrees.