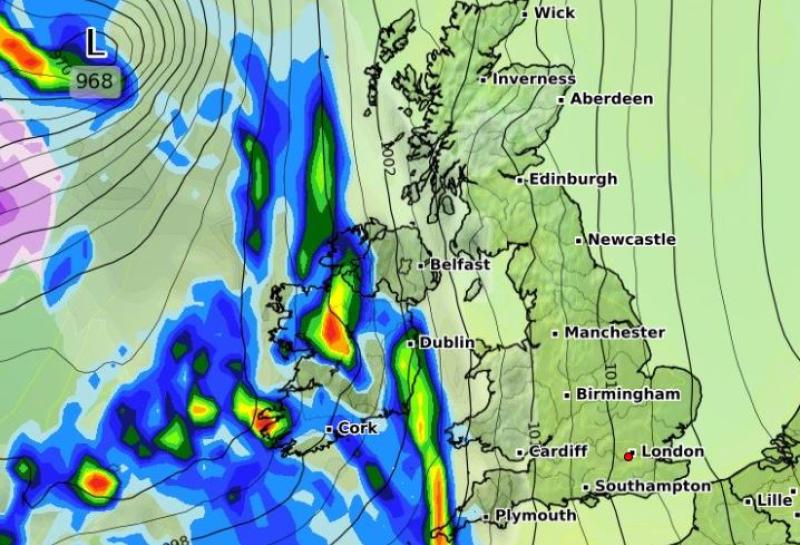 According to latest Met Eireann weather forecast for Ireland, the weather in Ireland is set to change dramatically this week after a very after settled weekend.

According to Met Eireann, Ireland is set to see a return to wet and windy weather this week with some wintry showers also in the forecast.

The weather forecast for Ireland from Met Eireann says that  there will be very unsettled, wet and often windy weather through the week, there may be some brief intrusions of colder air at times too, bringing some heavy showers, that may turn wintry at times but generally there will be a milder trend towards the end of the week.

According to Met Eireann, on Monday morning, frost will gradually clear. After a bright start, cloud will spread northwards. Most areas will stay dry, but some patchy drizzle will develop in Munster. Light southeast wind will increase moderate to fresh and it will be quite cold with highest temperatures of 5 to 8 degrees.

According to the latest Met Eireann weather forecast for Ireland, Monday night will start mainly dry with a mix of cloud and some clear spells and lowest temperatures dropping down between 0 to 2 degrees generally with a touch of frost in places. However in Munster cloud will increase early in the night with lowest temperatures there will remain between 2 to 5 degrees. Temperatures will rise as the night goes on as wet and windy weather spread from the south by morning. Southeast winds will increase fresh to strong and gusty, while rain will be heavy at times.

According to Met Eireann, there will be uite wet and windy for a time in the early morning, however the rain will quickly clear to sunny spells and squally showers or thunderstorms with a chance of hail. Highest temperatures of 6 to 9 degrees in fresh to strong and gusty south to southeast winds.

Showers will die off on Tuesday night as winds ease for a time early in the night leaving clear spells, as lowest temperatures drop to between 0 to 5 degrees. It will be coolest early in the night in Ulster and Connacht. Cloud and rain will spread from the southwest through the night, it will be heavy at times in the west where it may turn wintry for a time, especially over higher ground, however temperatures will gradually rise everywhere. Southerly winds will increase strong and gusty by morning with gales on western coasts for a time.

According to the latest weather forecast for Ireland from Met Eireann, it will be wet and windy on Wednesday morning, with the risk of sleet in the northwest diminishing, as the rain clears eastwards the winds will veer westerly and ease. Highest temperatures of 9 to 11 degrees, however it will be much cooler for a time after the passage of the rain in fresh and gusty southeast winds.

Becoming dry and mostly clear early on Wednesday night with lowest temperatures of -2 to +2 degrees leading to some frost early in the night, cloud will increase frost the southwest later in the night bringing milder conditions towards morning.

According to the latest weather forecast for Ireland from Met Eireann, Thursday will be mostly cloudy with patchy outbreaks of rain. Moderate southerly winds will increase fresh to strong and gusty by evening ahead of a band of heavy persistent rain that will extend into the west through the evening hours, turning heavy in places. Highest temperatures of 9 to 11 degrees.

Through the evening and early in the night the band of rain will extend across the country with some heavy bursts at times, it will be followed by a clearance to showers later in the night as the winds ease. Lowest temperatures of 6 to 8 degrees.

According to Met Eireann, there will be frequent heavy showers on Friday with some sunny spells and highest temperatures of 10 to 13 degrees in mostly moderate southwesterly winds.