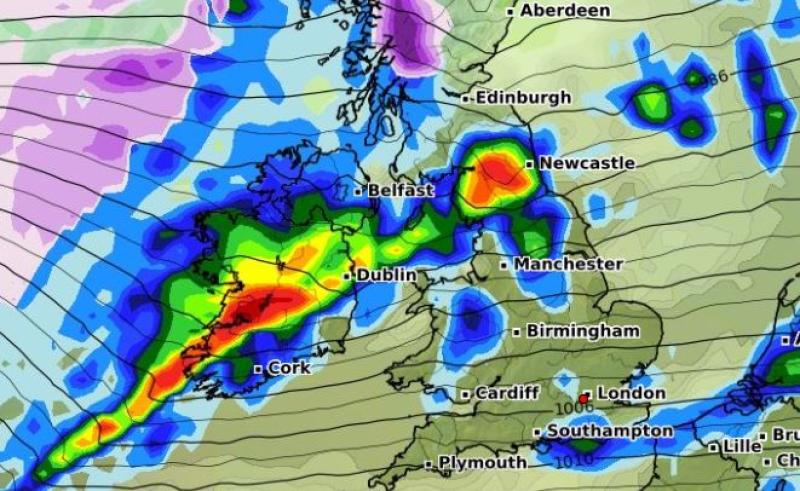 Met Eireann has issued more Weather Warnings as the spell of wet and windy weather for Ireland is set to continue into next week.

A Status Yellow Rain warning for Cavan, Donegal, Leitrim, Mayo and Sligo warns of persistent rain followed by heavy showers which will lead to localised flooding in places. This warning is in place from 6pm on Saturday until 6pm on Sunday.

A Status Yellow Wind warning has been issued for Clare, Cork, Kerry, Limerick, Donegal and Connacht. This comes into effect from 5am on Sunday until 9am on Monday. It warns that very strong southwesterly winds and some severe gusts are expected on Sunday morning, veering west to northwest on Sunday afternoon through early Monday morning. Strong winds, surge and phenomenal waves may lead to wave overtopping particularly at times of high water, and coastal flooding is possible along coasts.

Weather will remain unsettled over Ireland this weekend.

A separate Status Yellow Wind warning for Leinster, Cavan, Monaghan, Tipperary and Waterford has also been issued. This warns that very strong southwesterly winds and some severe gusts are expected later on Sunday morning, veering west to northwest on Sunday afternoon through early Monday morning. This warning comes into place at 11am on Sunday and remains in place until 9am on Monday.

The UK Met Office has also issued a Yellow Wind Warning for Antrim, Armagh, Down, Fermanagh, Tyrone and Derry from midday on Sunday until midday on Monday warning that very strong winds may cause disruption across Northern Ireland, southwest Scotland and Irish Sea coasts, particularly on Sunday night.