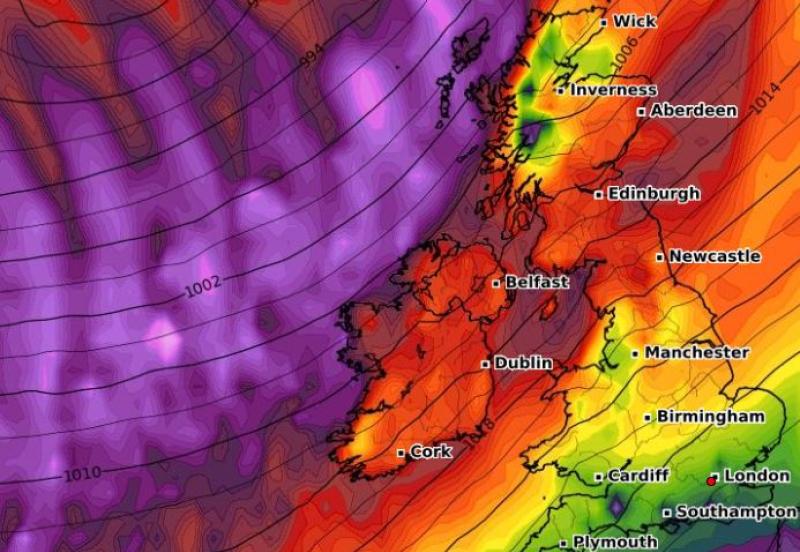 The weather is in Ireland is set to turn wetter on windier tonight and over the weekend according to the latest weather forecast for Ireland from Met Eireann.

WEATHER WARNING: Met Eireann issues wind and rain warnings for parts of Ireland with big change coming in the weather

According to Met Eireann, Friday will be a wet and windy night with widespread rain and strong and gusty southerly winds, reaching near gale force along western coasts. The rain will be persistent in parts of the west bringing a risk of localised flooding. Lowest temperatures occurring early in the night of 4 to 8 degrees but picking up over night. A clearance to scattered showers will move into the west towards dawn.

The Met Eireann weather forecast for Ireland for Saturday, is for a breezy day with outbreaks of rain in the southeast clearing to widespread blustery showers through the morning, with some heavy bursts in places. Some sunny spells will occur also with the showers becoming isolated towards evening. Highest temperatures of 7 to 11 degrees, coolest in Ulster, in fresh and gusty southwest winds.

Showers becoming confined to western coasts early on Saturday night with some clear intervals developing. Later in the night, rain will push in from the south, affecting much of Munster, south Leinster and south Connacht by dawn. Lowest temperatures of 4 to 6 degrees. Fresh southwest winds will moderate overnight.

The Met Eireann weather forecast for Ireland for Sunday says there is some uncertainty in the forecast for Sunday but it looks like outbreaks of rain will move up over the country with some heavy bursts in places. The rain looks set to clear northwards in the evening with scattered showers to follow. Highest temperatures of 7 to 10 degrees with moderate north to northwesterly winds.

Rain gradually clearing overnight on Sunday night with clear spells developing and scattered showers, mainly along Atlantic coasts, with a chance of the odd sleet shower. Lowest temperatures of 2 to 4 degrees, in moderate northwest winds.