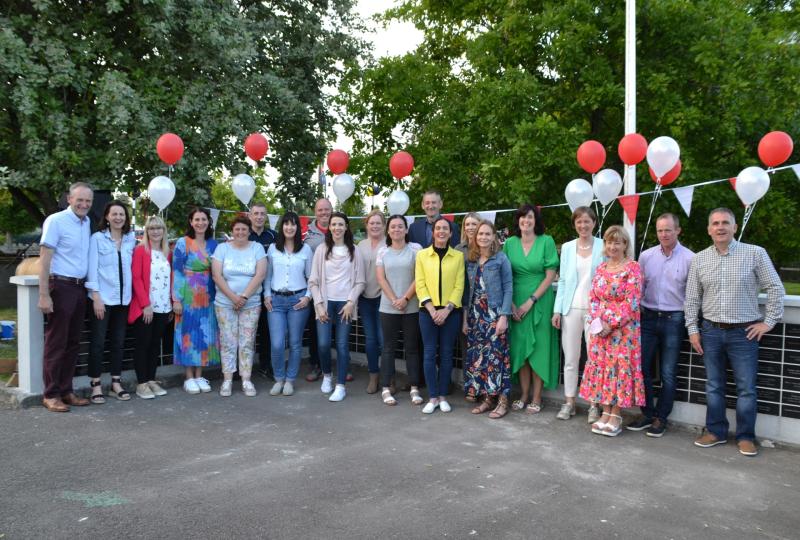 The Shinrone Sponsor A Sod committee at the official opening of its extended pitch and commemorative wall.

SHINRONE NS was delighted to welcome a great crowd of friends and supporters to officially open its extended pitch and commemorative wall on Wednesday June 22nd.

The fundraising campaign began in September 2019 to raise €40,000 to purchase and reclaim an adjoining piece of land to the school. Now, almost three years (and a pandemic!) later, the community got together to celebrate this fabulous achievement.

Jim Dockery, chairperson of the Sponsor A Sod Committee, reminded all of the journey from an idea by Joe Cleary, former principal, to the development of committees from the parents, businesses and wider community, to the door to door selling on cold Winter evenings in December 2019, to the fantastic success of achieving their target in a few short months. Jim also thanked the Parish Council who loaned the school the money to buy the land initially.

The story does not end there, however, as the land still had to be reclaimed and fenced before the children could use this fine facility. And finally their beautiful commemorative wall was built by local man Pat Moloney.

Following the speeches was the raffle, with tickets drawn by Sean Walsh, their oldest past pupil, Mia Crampton, their youngest pupil at present and Kathleen Carroll, their good neighbour and grandparent in the school. The winners of €1,000 were John and Sinead Ryan, past pupils, €750-The Younge family, Belfield, and €500- Gemma and Gary Mulrooney. Congratulations to all.

Next it was time to cut the ribbon. This honour went to principal Caitriona Cullinane who thanked everyone who made this dream a reality.

The evening ended with a cuppa provided by the Parents' Association and food provided by Fresh Today. A very enjoyable evening was had by all, which even included a little singing of The Offaly Rover by Sean Walsh and Slievenamon by Jerome King, Sheila Maher and Joe Cleary. A fantastic conclusion to a fantastic campaign.