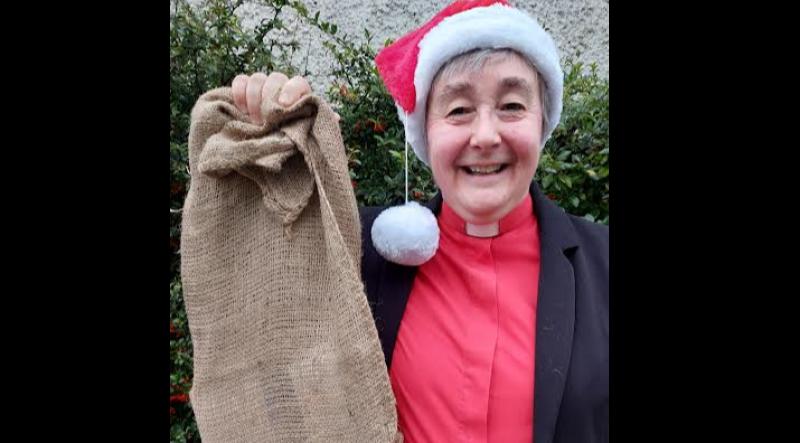 A new festive tradition began in County Offaly this week when an Anglican priest hung a sandbag on her mantlepiece instead of a Christmas stocking, to raise awareness of the hunger crisis in flood-hit South Sudan. Rev Fran Grasham is priest-in-charge of Geashill and Killeigh Parishes.

Normally deployed in flood prevention, the sandbag is being used as a reminder that extreme weather exacerbated by climate change is a powerful driver of poverty and hunger, especially in flood-prone countries such as South Sudan.

In October, South Sudan saw its worst flooding in nearly 60 years, forcing hundreds of thousands of people to abandon their homes. Unusually heavy rainfall in recent months caused the Nile to burst its banks, leaving huge swathes of rich farmland under water. As well as destroying homes, the flooding killed livestock and destroyed crops, worsening a food crisis which has left 2.4 million people at risk of falling into famine.

With her sandbag Christmas stocking, Rev Grasham is giving her backing to Christian Aid Ireland’s Christmas appeal which this year focuses on the hunger crisis in South Sudan. The Church of Ireland is one of Christian Aid’s sponsoring churches and Rev Grasham has always supported its work to end extreme poverty.

Christian Aid is working through local partners to respond to the hunger and flooding crisis in South Sudan. The charity is providing emergency life-saving support including blankets, mosquito nets, water purification tablets and cash to flood-affected families as well as cash, seeds, farming tools and fishing kits to families struggling to get enough food to eat.

Christian Aid Ireland Chief Executive Rosamond Bennett thanked Rev Grasham and all her parishioners who support the charity’s work to relieve poverty in South Sudan and around the world:

“For many years, Rev Grasham has stood in solidarity with people living in desperate situations. This year, her ‘sandbag stocking’ is helping to raise awareness of the impact that flooding is having on an already terrible hunger crisis in South Sudan.”