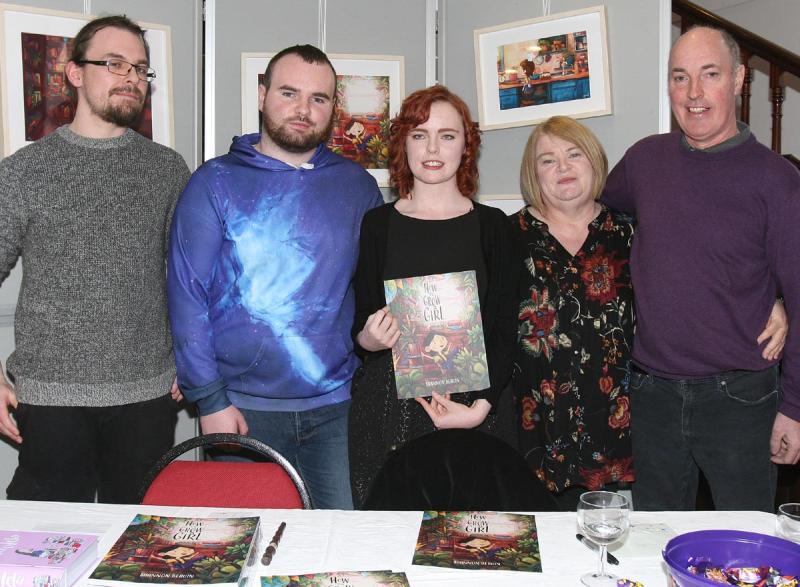 Shannon Bergin pictured with her ‘very proud’ parents Dolores and Kieran, brother Paul and boyfriend Barry Masterson during the launch of her book ‘How to Grow a Girl’.

A very talented 24 year old from Clareen, Shannon Bergin, has penned her first children’s book ‘How to Grow a Girl’, which she launched in Birr Theatre and Arts Centre in Birr recently.

She spent a year working on her new book she told a captivated and dedicated group of followers who turned out in huge numbers for the launch. “The book,” she said “is about adventures and growing up. At home our house was always full of books and crafts and so,” she said. Reading and story-telling was always in the family life and it certainly has brushed off on Shannon.

“I made my first picture book when I was about three years old,” she said. “Stories were always very important,” she commented. She also mentioned that when she was a child “growing up in Clareen there wasn’t very much to do there and so we invented things, often dangerous ways, a lot of falls, to amuse ourselves.” She continued, “we built ships and tree houses and my dad was often missing wood and ropes and whatever else we could get our hands on and our mam was often coming home to chaos and the general mess that was around the place but yes, we basically played many things and created stories in whatever way we could, so the book is all about that, about all the people you meet along the way, adventures, story-telling, about libraries and imagination and the importance of both,” said Shannon. In summing up what her book was all about, Shannon said that “basically, it’s about being who you want to be and the journeys out there”.

In thanking everyone who has supported her Shannon said that she “feels extremely lucky” that she can do this all the time. She thanked everyone “who supported me by buying my art work and keeping me alive”.

A busy young lady, Shannon is currently working on illustrations on another picture book which she said “can’t be announced yet” and on some exhibition work for a Kerry showing this coming summer. Shannon is also hoping to exhibit during Birr Vintage Week come next August as well as commission work she is doing too, so a busy lady indeed. Mostly an artist is how Shannon described herself commenting “I only did the book because I love illustration work but I do love stories too,” she said.
In her spare time, when she has any, Shannon loves to walk and chooses forests in particular where no doubt nature is at its best. She also loves to read, watch films but drawing and illustrations mean a lot to her, not just as a hobby but also is her livelihood, “anything but sport”, she laughs.

Citing her parents, grandparents and her aunt as her biggest inspiration and motivators, Shannon said that there was also a lot of people who she was surrounded by who were very encouraging and inspiring, people like illustrators and artists that she admired for years.

Her former art teacher in St Brendan’s Community School in Birr Yvonne Claffey said that “As Shannon's art teacher, I knew from an early stage that she had an extraordinary talent, displaying excellent drawing skills and developing her own unique style. Shannon was always very self motivated and her attention to detail has always been exemplary. It comes as no surprise that she has published her first book- 'How to grow a Girl' which showcases her vivid imagination, combined with her exceptional and unique drawing talent. We are very privileged to have such local talent in our midst. I have no doubt that Shannon Bergin is a name to look out for, and that she has a fantastic future ahead of her”.

Shannon graduated from Limerick school of Art and Design with a BA (Hons) in Animation and Motion Design and has won several awards including ‘Florence Vere O’Brien’ Hunt Museum Limerick Permanent Collection Selection in 2016. The following year she won the prestigious ‘ABLE’ Artist Book Award, in Limerick, and followed on with the runner up prize in 2018 with the LSAD ‘Drawing Awards’ Exhibition. She also won the ‘LIT Permanent Selection Award’ in Limerick the same year.

An illustrator who is interested in fairy tales, knitwear, mythology, plants, feminism and of course excellent storytelling found in books and animation, her work is almost always created with a pen, some watercolours, maybe gouache, pencils or even pastel and some digital painting too. She tries to create images that examine the role of fiction and its ability to shape one’s perception of reality.

As a gifted illustrator, Shannon has a huge selection of paintings which she has exhibited from Birr to Limerick, Kerry and Dublin and even the TAE Show in New York four years ago.

Her work can be bought by visiting her website shannonbergin.com and following the link.